What happened to common sense? 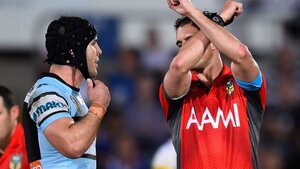 Seriously, how is it possible that Michael Ennis can play game three of this year’s State of Origin series despite being given a one-match ban?

Ennis, the Cronulla Sharks hooker, will front the NRL judiciary tonight to try and beat a grade one high tackle charge that will see him suspended for a game if he’s found guilty. If found not guilty, then the issue becomes a moot point and the NRL can save face. Carry-over points from another minor incident earlier in the season, coupled with the points handed down for a low-range high tackle in Saturday’s win over the Cowboys, will see him miss one match with a guilty verdict.

Had Ennis been named in the NSW side for game three he would serve his suspension in the Origin arena. However the Blues have found a loophole in the rules. Ennis was not named for NSW, meaning he would serve his one-game suspension this weekend and miss his club side’s clash with Manly on Sunday. If he were then called into the Blues side (as many are predicting) as a late replacement for an injured Robbie Farah, Ennis would be free to play.

Surely the game’s administrators could have seen this outcome playing out in reality at some point. Rules like this need to be black and white and thorough. If any of the other 17 NSW players were in the same position as Ennis this week, they would be automatically ruled out of the Origin decider, yet Ennis can still feature by exploiting this loophole. It should never have been left open in the first place and now that it has been found, why is the NRL not immediately slamming it shut?

There are just too many of these half-baked, confusing rules around this sport – rep players being named in the two opposing squads at the same time, Daly Cherry-Evans taking everyone for a ride around his contract, players announcing they are off to rival clubs but still representing a current club in the meantime. It isn’t good enough and you don’t see it in other sports.

If rugby league wants to truly be ‘the greatest game of all’ it could start by losing the mantra of being the poorest run sport on the planet.

Interact with the author via the Twitter handle @playtheballnz