The Warriors have named their side for this Friday’s Round 2 clash against the Melbourne Storm at Mount Smart Stadium, after tasting victory last week against Newcastle.

An unchanged starting line-up has been named for the New Zealand Warriors’ first Friday night game at Mount Smart Stadium since 2011 when they host the Melbourne Storm this week (8.00pm kick-off).

The club’s last Friday night home game was against the Canterbury-Bankstown Bulldogs on July 15, 2011, a match they won 36-12.

The Warriors have had only 28 Friday night home games in their history and just eight in the last 15 years.

Head coach Stephen Kearney has retained the same run-on side used in Sunday’s 26-22 breakthrough win over Newcastle, the first time the Warriors have won a first-round match since 2009.

Included in the line-up are Simon Mannering, Issac Luke and Charlie Gubb who all came out of the opening encounter with injury concerns.

“Simon will be fine, Charlie has to go through some concussion protocols and we’ll see how Issac is at training over the next couple of days,” said Kearney.

“We’re hopeful all three will be able to play.”

Bodene Thompson has been named in the No 17 jersey after being confirmed as a late interchange inclusion against the Knights.

Listed in the No 14 jersey again is utility Erin Clark (19), who will become Warrior No 216 if he makes the final 17 on Friday night.

Added to the extended eight-man bench is veteran wing Manu Vatuvei who marked his first outing of the year by scoring a try and making 116 metres from 12 carries in the Warriors’ 52-24 Intrust Super Premiership win over Newcastle on Sunday.

Friday night’s match will deliver the first milestone of the season when right wing Tuimoala Lolohea plays his 50th NRL match since his debut in 2014.

A club record is also a possibility for Shaun Johnson. He sits on 671 points needing just four to go past Stacey Jones’ points-scoring mark of 674.

It will be a unique experience for Kearney in just his second match in charge at Mount Smart Stadium. He has had long playing careers for both sides with 79 appearances for the Warriors from 1995-1998 followed by 139 for the Storm from 1999-2004 before serving as an assistant coach with Melbourne under Craig Bellamy.

Kearney isn’t concerned about the significance of the occasion but rather about what he sees as a huge challenge from one of the game’s most successful clubs. 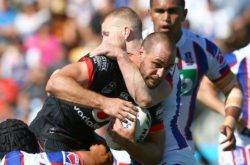