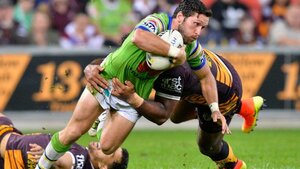 The New Zealand Warriors have re-signed Ligi Sao until the end of the 2019 NRL season and secured Canberra fullback/wing Zac Santo for the rest of this season and next on a second-tier contract.

Sao (24) returned home last season after a three-year stint with Manly which netted 21 NRL appearances from 2013-15.

Used in an interchange capacity in seven games so far this season, Sao had an injury-hampered campaign with the Warriors in 2016 which included his first NRL appearance for the club against Canterbury-Bankstown in Wellington.

Santo (24) made his NRL debut with North Queensland in 2014 and has been used twice at first-grade level since joining the Raiders in 2016. A regular for Canberra’s feeder club the Mounties in the Intrust Super Premiership, he was named at fullback in the ISP team of the year last season.

“Ligi has been a great acquisition for us, bringing his experience from Manly and helping to give us depth among our middle forwards,” said Warriors recruitment and development manager Tony Iro.

“We’ve been following Zac for a while and we’re excited he has become available in mid-season to give us more options in our outside backs.”

Sao and Santo become team-mates at the Warriors almost six years after they were opponents in the NYC grand final in 2011. Santo scored two tries for the Cowboys in a match which was level 30-30 after 80 minutes before Sao and his Vodafone Junior Warriors went on to take the title with a golden point extra-time field goal.

Townsville born and raised Santo has featured in the NRL Nines tournament at Eden Park every year. He was in North Queensland’s title-winning side in 2014 and again represented the Cowboys in 2015 while he was in Canberra’s line-up the last two years.

His only NRL appearance this year was at fullback in the Raiders’ season-opening clash against his old North Queensland side in Townsville.

Santo is due to begin training with the Warriors tomorrow.
About author