Warriors blueprint well off the mark 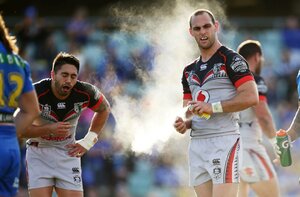 I don’t want to sound like I’m beating up on the Warriors after one disappointing loss – even the best teams have bad days.

Problem is however that I can see more bad days than good ones ahead with the approach the Warriors are employing at the moment. They have high ambitions – a top six finish a bare minimum according to managing director Jim Doyle – and the expectation from fans is also high given the number of high profile players on their 2016 roster.

I think they got it wrong out of the gate with what they are attempting to do and they have been searching for answers ever since while the other leading teams are slowly starting to hit their straps.

As is almost always the case early in the season most games in the NRL are going with the team that has more possession. With the exception of last season’s grand finalists – the Cowboys and Broncos – most teams cannot win games with a lion’s share of possession.

Which makes it all the more concerning that the Warriors are attempting to play a style of football that carries such a high risk of turning over the ball. I understand they want to maximise the natural ball-playing talent on their roster and playing an expansive style would suit that. But by trying to play on the edge all the time is fraught with danger and is almost always likely to result in producing more errors than the opponents.

The smarter way to play it would be to start the season playing a little within themselves and slowly turning up the x-factor dial as they find some success. It means you are more likely to have an even share of possession and the results should take care of themselves.

Now six games in, the Warriors new-look spine is still trying to gel together and last night’s loss to Manly showed they are really struggling to find any sort of attacking structure. While that continues it is hard to see them being able to put together a complete performance unless the opposition is really not up-to-scratch.

The other puzzling aspect of the Warriors play over the past couple of weeks has been the unique composition of the interchange bench. Andrew McFadden has opted to play a second hooker to share duties with Issac Luke, while he has selected Konrad Hurrell to cover outside back injuries and provide a big of impact in the middle.

That leaves just two just regular forwards to go into the rotation. Charlie Gubb is best suited to shorter, sharper bursts given his energy and high intensity play. Longer stints make him more vulnerable to being caught out laterally on defense. All of those factors put a lot of pressure on the Warriors senior props and starting second rowers to play big minutes. Ben Matulino played 65 minutes straight against Manly and the quality of his performance suffered as he became more fatigued.

There is a seriously high likelihood that fellow starting prop Jacob Lillyman will spend a week on the side lines after he was put on report for a second high tackle this season. With carry-over points any charge will see him miss a week. Against a Bulldogs pack that is as strong as any in the competition, the Warriors will need to re-think how they structure their bench.

With expectation internally so high and the external hopes resulting in significant scrutiny, the Warriors seriously run the risk of freefalling out of contention if they string together a row of losses. With tough games against the Bulldogs (in Wellington) and the Storm (in Melbourne) in the next fortnight it is quite conceivable that the Warriors find themselves with a two-win, six loss record and it would be nearly impossible for them to finish in the top six from that position.