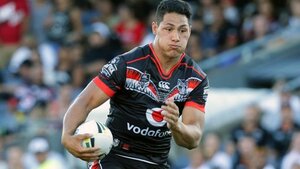 “These are critical decisions we’ve made in the club’s best interests for not just this season but also for our future,” said Kearney.

“We’ve given the captaincy a lot of thought throughout the offseason before reaching this point.

“Roger offers all the qualities we want from our players. He is a true professional in the way he goes about all he does, providing a wonderful example for players to follow. He’s also one of our leaders and has many years left in the game.

“Simon will give him the support he needs as vice-captain. It’s important to have him in the role because he epitomises everything our club stands for.”

“Hoff has given the Warriors tremendous service as a player since joining us in 2015 and as captain last season,” he said.

“As one of our leaders he’ll still have a critical leadership role to play this year. That won’t change.

“What we’ve done is to look further ahead with not just the captaincy but also the make-up of our squad.

“It’s exciting to bring Roger in as our new captain and to also secure Tohu Harris from next season. He’s a wonderful forward, still young and very much at the top of his game. I certainly look forward to having him with us next year.”

“I was really humbled when Mooks offered me the position,” said Tuivasa-Sheck.

“It’s a huge privilege to be captain of my club and I’m excited about taking on the added responsibility. I want to do all I can to help the Warriors become the club we all want it to be.”

Mannering, 31 this year, said he would give not just Tuivasa-Sheck but the entire team all the support he could.

“I stepped aside from the captaincy last year and enjoyed the chance I had to focus more on my own job as a player,” he said.

“Mooks has come on board and asked me to take on the vice-captain’s job. I’m happy to do it if he thinks it’s in the team’s best interests. For me it’s all about trying to make our club the best it can be.”

In his reign as captain Mannering led the Warriors a club record 136 times and added a 137th match in charge when he took over from Hoffman for a game last year.

Hastings born and raised Harris (25), off-contract with Melbourne this year, said he was thrilled about the chance to link up with the Vodafone Warriors.

“I’ve had a great time with the Storm and I owe them so much for what they’ve done for me,” he said.

“Coming home to play for the Warriors is a fantastic opportunity, though. The club has a great roster with so many Kiwi boys there and being back in New Zealand closer to family is a big attraction.

“I also have great respect for Mooks through my time with him in the Kiwis and I look forward to working with him again.”

Harris has made 103 NRL appearances for Melbourne since debuting in 2013 while he has played 16 Tests for the Kiwis.
About author