You are using an out of date browser. It may not display this or other websites correctly.
You should upgrade or use an alternative browser.
In 1995, the Warriors invaded the Australian Rugby League premiership – the first overseas club to be admitted – in a blaze of publicity and hype the likes of which New Zealand sport had never seen. This is the story of all 25 seasons.

Warriors 25 covers the triumphs, heartbreaks, controversies and revivals that have kept supporters coming back for more for a quarter of a century. In this exhaustively researched and officially club-endorsed book, sportswriter Will Evans tells the story of all 25 seasons, featuring interviews with some of the Warriors’ most prominent players, coaches and administrators.

Through the exhilarating highs and gut-wrenching lows, this book covers the on-and-off field events of every season, the club’s memorable matches and important figures, a wealth of trivia, including comprehensive records and stats for every game and player. These are illustrated with full- colour photographs throughout and a Warriors 25-year Team voted on by a panel of experts is included.

Available in all good book stores or CLICK HERE TO BUY ONLINE.

WILL EVANS is the author of A Short History of Rugby League in Australia (2012), A History of State of Origin (2013) and The Book of NRL Lists (2014, co-authored with Nick Tedeschi), and Rugby League Rivalries (2015). As a freelance journalist he has contributed to Big League magazine, Rugby League Review magazine and is the founder, editor and writer for This Warriors Life website. 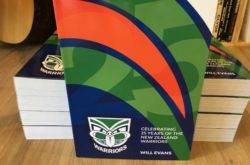