Round 17 saw the Warriors face the Gold Coast Titans in a hard fought encounter. In a match that was not only Simon Mannering’s 250th game as a Vodafone Warrior but also the 250th game played at Mount Smart Stadium, the Warriors came from behind to defeat the Titans 27-18. 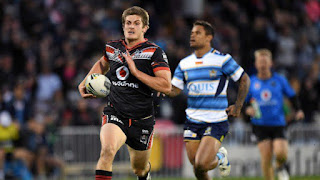 ​
The Titans were quick to silence the boisterous Warriors fans with a quick 90 meter try to Josh Hoffman from a poorly placed grubber kick from Blake Ayshford, Blake made up for his error a few minutes later with an 85-metre intercept try. Both teams went back and forth until the Titans got their second try by using Nene Macdonald’s height advantage over Tuimoala Lolohea.

An Error from the Titans gave the Warriors a sniff and they took it with both hands with Tuimoala Lolohea scoring with mere inches to spare in the corner making it 10 all at halftime.

Both sides traded penalty goals in the first 20 minutes of the second half and the game was on a knife-edge until Shaun Johnson took advantage of a gap in the Titans defensive line and scored a 60-metre try. Bodene Thompson scored minutes later to take the game out of reach for the Titans who did finish the game with a late try to Cameron Cullen.

Overall it wasn’t the best display from the Warriors but they managed to claw their way back into the game and take advantage of the Titans errors. Their defensive line was a let-down and they need to regain the defensive line speed that has been so impressive in the past month. The forwards need to focus winning the battle up the middle because the backline will not be able to be unleashed if they are continually on the back foot.

But on a positive note the Warriors are playing tough and getting results, they also no play for the entire 80 minutes instead of falling off in the final 20minutes which will worry a lot of teams that have to face them in the upcoming rounds. 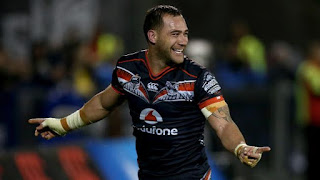 ​
My player of the day goes to Bodene Thompson.

Yet again Bodene put in another impressive display, I would place him as my player of the year so far as although he may not be scoring the fancy tries he is making a lot of the metres each week for the team and is always high up on the teams tackle count.

My player who needs to improve this round goes to Charlie Gubb.

With Ryan Hoffman being ruled out of the game with a virus, Charlie made the move to the starting lineup as Lock and I’m not sure if he was uncomfortable in that position or if he is not fit enough to be playing big minutes. I'm sure the performance of debutant Bunty Afoa did not help matters as Bunty played a tremendous game and kept Charlie on the sidelines with his performance. Both Charlie and Bunty have tremendous abilities and will have big futures with this club and I'm confident Charlie will learn from this game and come back strong in the weeks to come.

This win took the Warriors into the top eight and with a bye in Round 18 the Warriors get another two points and will stay in the eight.

The road home is not that bad for the side with only one game against a current top four side so if the Warriors continue to play the way they have in the past 6 weeks they have a very good chance of playing finals football for the first time since 2011.

Round 19 sees the Warriors travel to Perth to play the Manly Sea-Eagles in what will be a very tough game. The Warriors have not had a good time in Perth but this Warriors team has shown that they can overcome adversity and I believe they will be leaving Perth with the victory over what has been a disappointing Manly team.

What are your thoughts on the game vs the Titans?
Who do you think had the best performance?
Where do you think the Warriors will end up on the ladder by the end of round 26?

Let me know down below.
About author