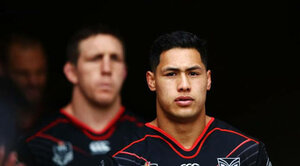 Captain Roger Tuivasa-Sheck has reinforced his commitment to the New Zealand Warriors by signing one of the longest deals in the club’s history, ensuring he’ll remain at Mount Smart Stadium until the end of the 2022 season.

The four-year signing coup was announced by Warriors CEO Cameron George at the club’s official season launch at SKYCITY on Tuesday night.

“As one of the game’s most exceptional athletes, Roger understandably attracted lots of interest, so we couldn’t be more delighted to have him onboard for another four years,” he said.

“Still only 24, he embodies all the qualities we want to see in our players.

“This is hugely significant for both Roger and the Warriors, not only critical for our future but also for Roger in paving the way for him to truly establish himself as a leader for the club on and off the field. He’s the type of person we can build our club around.”

Tuivasa-Sheck is entering his third season since joining the Warriors. His first campaign in 2016 was limited to seven appearances after a season-ending knee injury before he returned to feature in all but one game in 2017.

“I’m excited knowing my future will be with the Warriors for another four years after this season,” said Tuivasa-Sheck.

“I’m also glad to be able to sort it out now before the season starts.

“We’ve had some challenging times but all of us are working really hard to turn things around this season and in the years ahead.

“Wanting to be part of that with everyone at the club was a huge factor in my decision to stay with the Warriors.”

“He sets an example in all he does as a player on the field and in all aspects of training as well as looking after himself off the field.

“He’s a tremendous asset for the Warriors and has a huge appetite to improve each and every day.”

Tuivasa-Sheck warmed up for his seventh NRL campaign with a quality performance in the Warriors’ 20-14 trial win over the Gold Coast Titans on Saturday.

With 11 tries and 30 appearances for the Warriors, he has a career tally of 39 tries in 114 first-grade games.
About author