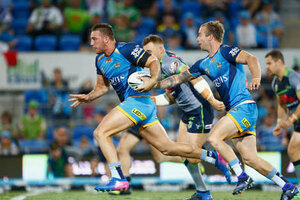 Gold Coast utility Karl Lawton has today been signed by the New Zealand Warriors while hooker Sam Cook and highly-promising fullback Hayze Perham have had their contracts upgraded ahead of the 2018 NRL season starting next week.

Warriors general manager football Brian Smith said Cook and Perham had been rewarded for their performances in the preseason and the club’s NRL trials while the 22-year-old Lawton has been secured on a two-year deal.

Capable of playing in the halves, the outside backs, hooker and loose forward, Lawton has made 12 NRL appearances since his debut against the Warriors in 2016, an occasion which ended in disappointment when he broke his leg.

He recovered to turn out 11 times for the Titans last season when he alternated between starting at hooker and being on the interchange bench.

“While Karl’s versatility is valuable, he’s principally a five-eighth who’ll give us experience and add to our depth in the halves.”

“We really like what Karl has to offer and he’ll be a great addition to our squad,” he said.

“He lined up against us twice last season and we’ve also seen him in trials so we have a good understanding of his qualities.

“It’s also pleasing to see Sam and Hayze promoted. They’ve been wonderful during our preseason training programme and also impressed in both trials.”

As well as Cook and Perham, Smith noted other rookie talent featured in the club’s NRL system including Chanel Harris-Tavita, Joseph Vuna and Matiu Love-Henry.

“They’re all examples of the rewards available to young players rising through the ranks at the Warriors,” he said.

Northcote junior Cook (24) made 10 NYC appearances for the Junior Warriors in 2013 and has since gone on to play 37 times for the club’s Intrust Super Premiership side. The Westlake Boys’ High School product spent 2016 playing in Newcastle before coming back home last year. He played all but one of the team’s 25 games and was named the club’s 2017 ISP Team Man of the Year.

Standoff Harris-Tavita (18), the club’s 2017 NYC Player of the Year, has rugby league pedigree on both sides of his family (his grandfather Ray Harris represented NewZealand Maori). A Pakuranga College, he played his junior rugby league for the Mount Wellington Warriors while he also had stints with the Richmond Rovers and Howick Hornets. Still eligible for the under-20s for another two years, he played for the Junior Kiwis last year (he has played 39 times for the Junior Warriors in the last two years).

Vuna (19) also comes from a family with a strong rugby league heritage. A New Zealand Secondary Schools representative, the ex-Otahuhu College junior and Otahuhu Leopards junior has made 43 under-20 appearances for the Junior Warriors over the last two seasons.
About author