This week in Warriors history – Rd 16 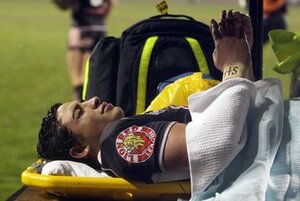 There is nothing quite like the old days, so sit back and take a look as kiwileaguecentral.com checks out this week in Warriors history. (Main photo: photosport.nz).

As the final minutes of the Warriors’ clash with the Roosters in Christchurch approached, Kevin Locke had already enjoyed one of his best games as a first-grade player.

A pair of tries – one where he nipped between the legs of Roosters’ winger Phil Graham to touch the ball down inches away from the dead-ball line, and a second where he burrowed over in the right corner of the field – meant Locke had kept the Warriors right in the contest.

What happened next won the New Zealand side the game and almost re-arranged the shape of Locke’s body.

With four seconds left and his side trailing 18-14, Locke latched on to a Lance Hohaia grubber, toed it ahead and then sprinted past the desperate cover defence to touch down.

In the process he slammed his hip and left side of his body violently into the corner post, showcasing zero thought for self-preservation.

The try, followed by James Maloney’s conversion, gave the Warriors a 20-18 win in front of 20,721 fans at AMI Stadium, in horrible wet conditions.

Initial fears for Locke included a serious hip injury and broken ribs. He was later cleared of both, but suffered bad bruising to his body and medial ligament damage to his knee as a result.