This week in Warriors’ history

You are using an out of date browser. It may not display this or other websites correctly.
You should upgrade or use an alternative browser.
There is nothing quite like the old days, so sit back and take a look as kiwileaguecentral.com’s Andrew Marmont checks out this week in Warriors’ history. 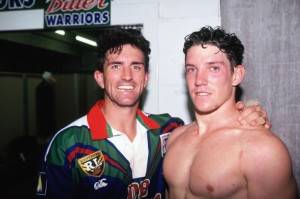 It still hurts to this day. After narrowly losing to Brisbane and Illawarra in their opening matches of 1995, the Auckland Warriors finally got their first club win in Round 3, defeating Wests 46-12 at Mt Smart Stadium. But because they fielded an illegal replacement (Joe Vagana), the win was later deemed invalid, costing the side a place in the finals too.

Fun Fact: Others Warriors to score four in a game include Stacey Jones, Glen Fisiiahi, Joel Moon and Jerome Ropati.


We aren’t talking about some macho challenge here. The Warriors finally had their first victory against Manly in four attempts, as well as their first win at Brookvale, winning 36-10 in Round 3, 1999. Jones kicked three from five, Joe and Nigel Vagana scored tries while Joe Galuvao occupied a centre spot.

Fun Fact: Big Joe Vagana only scored nine tries in his Warriors career (115 games from 1995-2000). He played with his cousin Nigel for two seasons, scoring six tries in this time, with Nigel scoring in five of the six games where his cousin also scored. 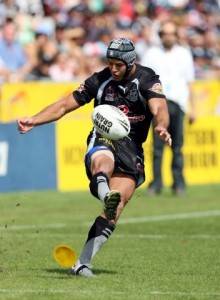 Tony Martin had a great year with the boot in 2006. Photo: photosport.nz
2006: Brightness after the Darkness


The club recovered after one of its messiest chapters – being docked four competition points and fined $430,000 after salary cap breaches in 2004 and 2005 – to get their first win of their season against the Wests Tigers at AMI Stadium in Christchurch. Despite the massive distraction and emotion involved, then losing their first two games of the year, the Warriors posted a 26-10 win and their first in Christchurch in four attempts. Awen Guttenbeil, Brent Webb and Nathan Fien had standout performances.

Fun Fact: Tony Martin, who kicked three goals that day, had his best NRL season with the boot in 2006, with 160 points. He sits behind Ivan Cleary, James Maloney and Shaun Johnson with this tally in terms of points in a season.


Young James Maloney had moved across from the Melbourne Storm and played his third match against the Brisbane Broncos in what shaped as a very tough assignment. Eighty minutes later, Maloney would carve his name into Warriors’ folklore with a club-record 28 point-haul (three tries and eight goals), as a team hungry for points put in one of their best performances in club history. It finished at 48-16.

Fun Fact: Lance Hohaia (from the bench v South Sydney, Round 16, 2006) is the only other five-eighth to score three tries in a single game. Since this match, the Warriors have only won two of their last seven matches at Suncorp.

This article first appeared on http://www.kiwileaguecentral.com
Reactions: 1 users
About author