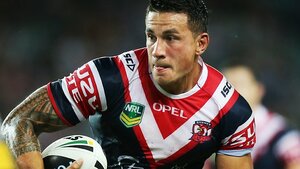 There are still a handful of unsigned NRL players negotiating with clubs at the moment and some fans still wondering who will play for their team next season.

But such are the rules the sport lives by, clubs can now begin negotiating with players that are off-contract at the end of the 2016 season – a whole year away. One name that fits into that category is All Blacks second-five and two-time NRL premiership winner Sonny Bill Williams.

Williams, who turns 31 next August, becomes a free agent as of the end of next year. His second stint in rugby coincided with the 2015 Rugby World Cup and 2016 Rio de Janeiro Olympic Games – two major milestone Williams often spoke about in terms of his career goals. But with those successfully ticked off at the end of next year, who knows where the code-hopper will aim for next. It could well be back to the NRL – he signed to play for two seasons in rugby league in between last Rugby World Cups.

If he was to head back to the NRL there would be any number of suitors but, contrary to popular belief, Williams has never just signed on with the biggest offer. Instead he has looked closely at which club is likely to bring him title chances and at which destination he would be most at home. If he were to stick to the same M.O this time next year three clubs stand out as potential landing spots. He could re-join the Roosters, where he stood out in his second stint in rugby league, winning the 2013 NRL premiership. He could possibly go back to where it all began and re-join the Bulldogs nearly a decade since he sensationally walked out on them. The third possibility is that he remains in New Zealand and signs with the Warriors. All three clubs have decent rosters and all three would be a decent bet to win a premiership in 2017.

Williams would command a big chunk of salary cap space and therein lies the issue for those clubs who remain interested in his signature. To acquire his services they’ll need to carefully manage their cap – making sure they didn’t over-commit funds for the following season. They’d have look at what players become free agents at the end of 2016 and which positions they need to fill.

The Warriors case is even more perplexing. They don’t have a lot of cap relief at the end of 2016. Only a handful of players are off-contract 12 months from now and not many are on large deals. That means the majority of their cap space is already consumed for 2017 so signing Williams would either be the only thing they could do or they would need to offload some players without eating what those players are owed. In simple terms they would need to offload players that other clubs were willing to sign for at least the same value as what the Warriors had them signed for.

While a return to the Roosters, a second stint with the Bulldogs or remaining in rugby union remain the more likely outcomes, the Warriors will be considering their position and will surely kick the tyres on Williams and that may happen sooner rather than later.

Reactions: fanrrior
About author
Play The Ball
This article has been written by Dale Budge. Dale is a well known rugby league commentator and journalist, having covered the sport for over 10 years.

Would bust my Warriors shorts if this happened!