Physically all 1.88 metres of him stands out. And the voice too, it’s deep like Sigmund Freud during an epiphany.

Many of the pupils here are drawn to him, darting in and out of his path for a greeting and some small talk.

‘Kolo’ is personable by nature, and as a result the mingling is organic and warm.

But that is also helped by the fact that he has been in the same shoes as many of these kids. Walked the same streets, grown up in similar circumstances and shared the same dreams.

He gets them, and in turn they seem to get him.

Tongan-born and partially raised before moving to Auckland, Vainikolo reached the pinnacle in not one, but two major sporting codes as a rugby league and rugby union international.

He lived the dream, now he’s back to help others do the same.

At 37 his role as director of rugby at Otahuhu College is his “first real job”, having spent his entire previous working life as either a professional player or coach.

“It was just the family that brought me back, that was the big thing for me,” Vainikolo says.

“My wife Sienna and my son Kava…we have been away since 1997, it has been a long time.

“Plus my son is starting to grow up now and he is starting to know a few things and ask questions and stuff like that…he hadn’t even met all his cousins.” 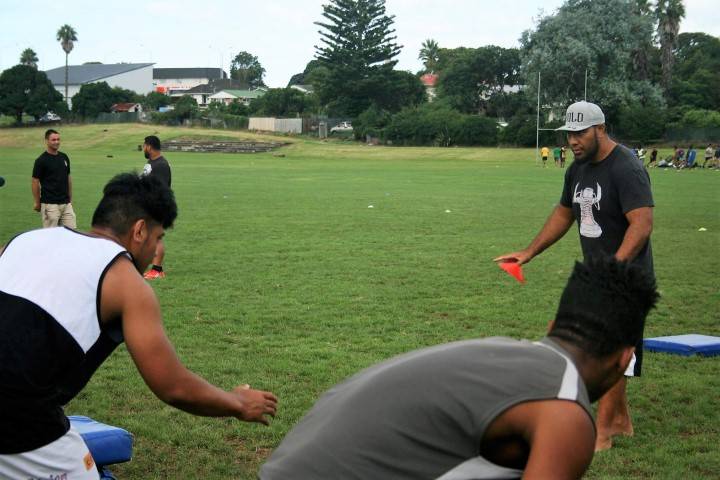 Vainikolo takes his Otahuhu College rugby players through a training drill.
The catalyst for bigger and better things


Vainikolo spent the first six years of his life in Tonga’s capital city, Nuku’alofa, a place which despite its natural beauty, is dogged by poverty.

“I remember everything about growing up in Tonga…how we struggled and how my mum couldn’t work and my dad and brothers worked two jobs,” Vainikolo says.

“The struggling, trying to put food on the table and things like that. The stuff my parents had to go through. My parents often gave up their meal so the kids could eat.

“They came over here to New Zealand and worked hard to support the rest of us back in Tonga.

“It was a hard time in Tonga, man, but we were lucky we lived by the sea so my brothers could go fishing while mum looked for stuff to eat at home.”

As he grew up those first-hand lessons around hard work and sacrifice would prove useful on the sports field, with Vainikolo excelling in both rugby league and athletics, where he was counted as one of New Zealand’s best junior sprinters.

“I was always big for my age, when I was hitting high school I was just on 100kgs,” he says.

“Trying to move 100kgs quite quickly at that age and at that time was difficult, so I got into athletics to help my running and league.

“I was only young but I was racing guys like (former Olympian) Gus Nketia, he was running 10.1, 10.2 back then. I didn’t like losing, so I was always trying to catch up to him.

“There weren’t many people who caught up to me but I had to work hard to try and get him.

“I made it to the Junior World Championships which was held in France and I had to choose between that and league, because that was when the Canberra Raiders picked me up.

“Long term the Raiders was the better option for me. Athletics was there but I needed a lot of work to be really good at it, and the league I had more passion for, nothing against athletics, but league was more my thing.”

In the space of 10 years Vainikolo went from a kid living meal-to-meal in Nuku’alofa to being a highly sought after athlete, gaining attention from talent scouts in two different countries and two different sports.

The birth of The Volcano


Ahead of the 1998 NRL season Vainikolo arrived in Canberra to take up his first professional contract.

“It was a bit daunting, but I was quite lucky I had Mal Meninga as my mentor and my coach.,” he recalls.

“There was also Ruben Wiki to mentor me, I was quite lucky that group was there, they had a good buzz as a unit and I fitted in well with that.

“I am good like that, I can adjust to where I am, I am open to things and I am not shy.

“It was pre-season training and I rocked up, I remember seeing guys like Ricky Stuart and Laurie Daley, and training with my idol Mal.

“Mal was my hero for his power and speed, Allan Langer was the other because of his smarts.

“Put them both together and you have me (laughs).”

Vainikolo proved a big success in his first year, scooping up the club’s Rookie of the Year award after crossing for eight tries in 19 appearances, and representing the Junior Kiwis at the end of the season.

Less than a year later he swapped the junior jersey for a Kiwi one, making his New Zealand debut in the 1999 Anzac Test loss to Australia, before taking part in the end-of-year Tri Nations campaign which saw New Zealand beat the Kangaroos 24-22 in pool play and suffer a heart-breaking 22-20 loss to them in the decider.

Another strong campaign saw Vainikolo score 13 times in 22 appearances in 2000, earning himself the nickname ‘Volcano’ from commentator Peter Sterling in the process.

But things started to sour in the Australian capital.

“I was looking for new opportunities and the Bradford Bulls came along.

“Joe Vagana was there, Robbie Paul was too and Henry Paul had just left and gone to rugby.

“Knowing the Kiwi boys and the Aussie boys, they were all there and it was a good mixture.” Giving Nathan Hindmarsh and Shane Webcke a taste of tackling The Volcano in the 2004 Anzac Test. Credit: photosport.nz
Running with the Bulls


When he put pen to paper with the Bulls ahead of the 2002 season, Vainikolo joined one of the most successful rugby league clubs in the world at the time, with Bradford having won the Super League title in 2001.

His signing added a considerable injection of attacking potency to a team who already boasted the likes of Kiwi playmaker Robbie Paul and English representative halfback Paul Deacon.

Aside from being a very good rugby league side, Bradford had also carved a reputation as the rock stars of rugby league.

Their pre-match entertainment was often extravagant, their players forthcoming and media savvy and their fans among the most committed and recognisable in northern English sport.

Who better to join a group like that than a beastly-built Tongan bloke with big hair, big character and the on-field ability to back it up?

“Bro, it felt good to be part of that community and be part of something that was really big back then,” Vainikolo says. 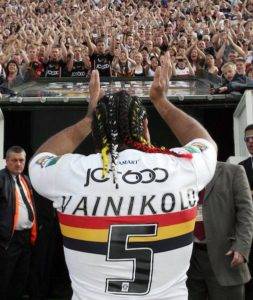 “It was an honour to be part of that. I wish it would have lasted forever, it didn’t, but looking back now it feels good.

“There were times at Bradford when it just felt like we couldn’t lose.

“In 2003 we won everything, no club had ever done that – up until Leeds did it in 2015 – and that year we just went through the motions with winning.

“I never lost a game to our local rivals, Leeds, home or away, they were always close games, but man it was awesome.

“Bradford fans were the best supporters in the Super League. When I was playing we were getting full houses wherever we would go.

“The place is going to be close to my heart for the rest of my life. They were great supporters and a great team as well. I will take it with me wherever I go, I felt like a special guy back then.”

Through the most successful era the Yorkshire club experienced, Vainikolo was so often the final piece to an arrow head which pierced through the heart of countless teams.

By the end of his seven seasons with the now-defunct Bradford Bulls, Vainikolo had 149 tries to his name, incredibly averaging a four-pointer almost every time he took the field in 152 appearances.

To this day he holds the gong for the most tries in a Super League match (six), and is equal-second on that list as well with five against Wigan a year earlier.

In 2005 he scored 10 tries in two games against Hull FC alone, and up until last year Vainikolo also held the record for the most tries in a single season, with 36, before Auckland-born Denny Solomona crushed it with 40.

What’s more, he sustained it over seven seasons.

Arguments that he did it with one of the best teams in a Super League competition, which admittedly is inferior to the NRL, should be redundant as well; he was able to achieve similar feats with the Kiwis (14 tries in as many games) and even as a young player in Canberra managed over a 50 per cent strike rate with 35 in 69 appearances.

An end-of-career move to across to rugby union didn’t slow him either, and in his first game for Gloucester Rugby Vainikolo touched down five times.

The fact that the bulk of his career was played in the UK means his achievements were probably never fully recognised in this part of the world.

Had he spent his days playing solely in Australasia it’s likely the Volcano would have gone down as one of the most-prolific scorers in the NRL era, and he would almost certainly have played more than 14 Tests for the Kiwis.

But his sporting legacy doesn’t really matter to the kids at Otahuhu College these days. Mr Vainikolo is an icon to them for much more important reasons now.

This article first appeared on http://www.kiwileaguecentral.com
Reactions: 1 users
About author