The need for a Pacific Origin series 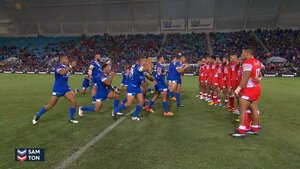 No-one has quite figured out what it is about State of Origin that makes it work – it just does.

Not only do footy fans from NSW and Queensland act parochial to a sickening level during the middle of each year but the fever has caught on around the remaining Australian states, New Zealand, the Pacific Islands and further afield. The Origin concept works for whatever reason but much of it has to do with the battle lines – there is a natural rivalry before a ball is kicked in anger.

Much discussion has been made around the idea of New Zealand holding our version of the interstate rivalry – North v South, Auckland v the Rest etc. There could be some merit in those types of games but I don’t think they could invoke the same passion and competitiveness that makes Origin what it is. The way to draw out that passion is by setting the game up based on national pride and to include the Pacific Islands in the mix, where the game is taking off.

The answer is to stage a New Zealand v the Pacific Islands test series. I touched on this idea a couple of days ago but to explain again I would stage a game in New Zealand, a game in Australia and a game in a Pacific Island country each year. The venues could rotate each season but the huge Pacific fan base across all three countries would get a first-hand taste of the action each year.

The Kiwis would be at full-strength and the revenue generated from the series would be significantly more than what is garnered from the one-off ANZAC Test each year. League fans in New Zealand would have a three-test series in the middle of the season. That means media and fans alike talking about selection, form, strategy all during a time of the year when the international game barely gets a headline. Sponsorship would be worth a lot more, as would television rights and on the field the Kiwi players would play ever more footy alongside each other, enhancing combinations. It could help take the sport to the next level in this country.

A combined Pacific Islands side – utilising the best talent from Papua New Guinea, Fiji, Samoa, Tonga and the Cook Islands would match up fairly well against a Kiwi side. These nations play with such passion that it wouldn’t be hard to match that of the interstate clash. Many of the Pacific players would have played with the Kiwi players before and so the whole mate against mate concept could be at play in this clash. The fact that a gam of such magnitude could be staged in the islands would have huge impact there and be the highlight on their sporting calendar.

The idea would work perfectly if the State of Origin matches were to be staged on a stand alone weekend under the next television deal – it would mean two big matches in two different weekend timeslots.

I’ve tried to come up with a couple of mock teams below. Consider them as an example. As always, let me know your thoughts via the twitter handle – @playtheballnz