The highest bidder is not the best option 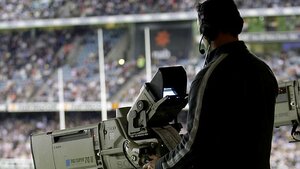 The NRL brass are currently negotiating with broadcasters about the next television deal that will take the game forward from 2017. They better be listening to the growing chorus of voices screaming about not just taking the biggest offer on the table.

When the last deal was signed back in 2012, the NRL trumpeted as a huge win for the sport as they reaped a payday of over $1 billion. Sure, that was a significant figure and it has helped put the game in sound financial position. The downside to that deal though is the fact that those television broadcasters are running roughshod over the game. State of Origin supersedes everything and the NRL is relegated to after-thought status during the middle part of the year as Des Hasler so eloquently explained at his weekend press conference. The TV companies dictate which match-ups go into which timeslot, which leaves the glamour teams getting significantly more free-to-air and prime time coverage. All of that results in those clubs earing a lot more than others in advertising and sponsorship, which flies in the face of the league having a salary cap that is so stringently policed. Channel 9 even moves the kick-off times of their televised games around to suit – the concept of kick-off bingo has become popular over the past two seasons as fans try to guess what time the ball will actually be kicked off.

I understand that television pays for the game so they should be able to demand for a timeslot that works best for them but they shouldn’t be able to determine which teams play etc. They certainly shouldn’t be able to have any say on the way the sport is governed. The NRL has a good product – it could be even better with a few tweaks – and is in a good position to negotiate. Their mentality should be that of we are going to make the best decisions by the game and then take that to the broadcasters and ask how much they’re willing to pay.

I heard new Warriors chief executive and former NRL COO Jim Doyle at a lunch last week say he knew how valuable State of Origin was to a broadcaster on a Wednesday night and that he couldn’t see it being moved to a stand-alone round. Hang on, the NRL’s responsibility is to run the game the best way possible not sell to the highest bidder. I would bet anything that if the NRL simply made the decision that Origin was going to be staged on a stand-alone Saturday night, those same broadcasters would be queuing up to bid on the rights. Sure it might not fetch absolute top dollar but it won’t be far off. When you talk the sort of figure the next television deal is likely to be the game would be healthier with five percent less but being able to make the necessary changes to the season structure.
About author
Play The Ball
This article has been written by Dale Budge. Dale is a well known rugby league commentator and journalist, having covered the sport for over 10 years.