The Echo of Ali 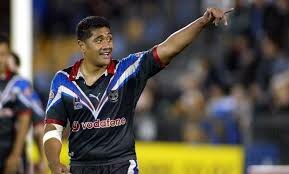 “What we do in life echoes through eternity” so the famous quote from the movie Gladiator goes. I am not sure about eternity but the biggest mistake in Warriors history seems to have echoed through the club for the past 13 years. What is the mistake? The releasing of Ali Luaitititi.

Lauitiiti was something special, a big man with amazing ball skills, he is still the most exciting forward the club has ever developed. Despite being only 24 years old when he left the club, the backrow forward still managed to play over 100 hundred first grade games and was one of the key factors in taking the club to the 2002 Grand Final.

In 2004, Lauitiiti went through a dip in form and was regularly being called into meetings with CEO Mick Watson. At the end of one of these meetings, Lauitiiti was informed that he was no longer needed at the club and a security guard escorted him from the club premises. This decision could only have been made by a CEO without a rugby league background, when you find a talent like Lauitiiti you do everything you can to accommodate them. Even though it was 13 years ago, I still struggle to believe that it really happened, releasing the likes of Lauitiiti just seems to ridiculous to be true.

The echo of letting Lauitiiti go has filtered down through the next 13 years, almost like the rugby league gods were making the club pay a penance for wasting such talent. For the most part, the club has struggled to find anyone close to the attacking prowess of Lauitiiti. In the years following his release it looked like Sione Faumuina may provide the spark needed for the Warriors, however, the gifted player battled for consistency and his Warriors career ended with him being sacked after several, alcohol-related cases of misconduct.

Post Faumuina, the Warriors have struggled to develop or recruit players in the Lauitiiti mould. In 2011, Ivan Cleary seemed to sense what was missing and shelled out big money to lure Feleti Mateo across the Tasman. Mateo was another x-factor backrower who had the potential to create something from nothing. Unfortunately, he would not fulfil his potential in the Warriors jersey and eventually moved on after 4 seasons at the club.

Since then coaches seem to have accepted their lot and the back-row attack has been bland. It is sad to see a Warriors side run out that doesn’t carry our unique style of play. In the past, even when the team was playing poorly, there was a feeling that they could score from anywhere at any time, that feeling is long gone.

Last year Jim Doyle made the decision to bring Lauitiiti home for one last year playing reserve grade for the Warriors. Upon his arrival, Lauitiiti mentioned that the young players did not really know who he was, how terribly sad. It left me imagining the alternate reality where he had become a 200-game veteran and every kid grew up wanting to be the next Ali Lauitiiti.

Watching our current brand of football is hard, especially if you are comparing it to a Warriors side attacking off the back of a Lauitiiti off-load. It is like we have a giant Lauitiiti sized gap in our squad. I only hope that somewhere, somehow the club can unearth another Lauitiiti and this time we steward the gift so much better.
Reactions: 5 users
About author