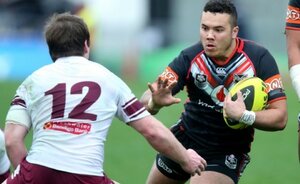 Jazz Tevaga added his name to the list of Christchurch-born rugby league players to crack the NRL on March 20, making a memorable debut at hooker for the Warriors in their brave Round 3 loss to Melbourne Storm at Mt Smart Stadium.

While he is a Papakura Sea Eagles junior, Tevaga spent the first few years of his life in Canterbury – and laced on his first pair of footy boots at four years old for the proud Burnham Chevaliers club.

Tevaga played with the Nikorima brothers, Brisbane Broncos utility and incumbent New Zealand Test halfback Kodi and Sydney Roosters five-eighth and Junior Kangaroos rep Jayden, in the Chevaliers’ junior ranks while their fathers were based at Burnham Military Camp in the late-1990’s.

He recalls watching his father play for the Chevaliers’ senior team before the family moved to the North Island. 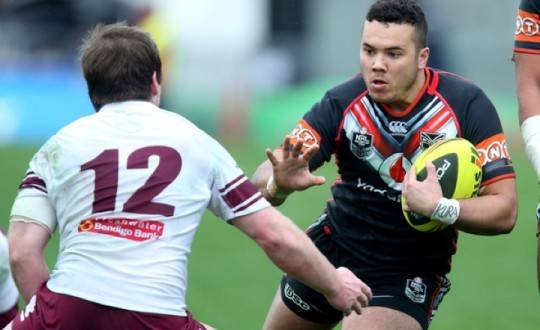 Jazz Tevaga in action for the Junior Warriors. Photo: photosport.nz

Drafted into the Warriors’ Under-20’s squad early in 2014 after impressing in an open trial, Tevaga starred at lock in the club’s NYC grand final triumph that year – coincidentally, with Kodi and Jayden Nikorima in the vanquished Broncos side.

Small for a back-rower, he developed into a promising hooker at NSW Cup level in 2015, assuming the No.9 jumper for the second-tier outfit this season. His recent elevation to NRL status – following an injury to star dummy-half Issac Luke – came as a massive surprise, however.

“After NSW Cup training (on Saturday), we were going through our final run-through and the manager came over and told me I needed to go and train with first grade,” Tevaga said.

“‘Cappy’ (coach Andrew McFadden) pulled me over and told me I was starting. I was shocked.”

Tevaga produced an eye-catching display in top company. He played 59 minutes of the torrid encounter, due to an injury suffered by interchange hooker Nathaniel Roache, who himself debuted in Round 1.

The 21-year-old reeled off 33 tackles and impressed with his confidence with the ball in hand, making five probing dummy-half bursts. Despite an extremely limited build-up, Tevaga combined seamlessly with the Warriors’ ball-runners and playmakers.

He also demonstrated his toughness by returning to the fray after being sandwiched between teammates Jacob Lillyman and Jeff Robson, and leaving the field to undergo a concussion test. Earlier, he stayed on the field after receiving treatment following a punishing late tackle by Kenny Bromwich.

The softly spoken youngster played down his immense contribution to the Warriors’ much-improved performance in the 21-14 loss to the ladder-leading Storm – but he was certainly satisfied when asked for an appraisal of his maiden NRL outing.

“Yeah, stoked. I’m just thankful for the opportunity to debut in front of my family and friends, and a home crowd.”

Tevaga, who took the field in the No.24 jumper to become Warrior #209, did not appear overawed in the slightest at debuting opposite arguably the greatest hooker in premiership history, Melbourne, Queensland and Australian skipper Cameron Smith.

It was, however, another highlight that capped off a momentous day for the rookie.

“(Smith’s) been one of my idols for a few years, being the best hooker – I think – in the league,” Tevaga beamed.

“To debut against someone like him was a dream come true.”