Team Of The Year Already Set In Stone 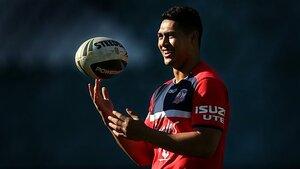 With three rounds to go in the competition I thought I’d examine the possibilities for the team of the year and how many positions could be determined by form over the final three weeks of the regular season.

For each position I’ve listed four finalists as such in each position. As I look through it, most positions seem pretty well set at this point.

So strong are the arguments for these four I’ve had to overlook the superb play by Greg Inglis and Brett Stewart. Coote has been tremendous all season for the Cowboys, as has Dugan for the Dragons and for NSW – though Origin form really shouldn’t count in this exercise. Tedesco’s finish to the season has been sublime but it would take a huge three weeks from any of those players to match what the Warriors-bound Tuivasa-Sheck has done in his first full season in the number one jumper.

The fact that Radradra finds himself on the shortlist despite missing a couple of months through injury is testament to how well he has played even in a poor side. Rona started well but his try-scoring deeds have slowed in the past month or two. Koriobete has been fantastic on the end of the Storm back-line but I think Holmes, who has swapped between wing and fullback, is the man to beat. His x-factor play has given the Sharks something they’ve been missing and is largely responsible for his team’s late-season form.

Ferguson has probably played at a higher level than the other contenders here but missed too much time to win the award. Gagai has swapped positions a little and suffered in a disappointing Newcastle side. Croker has enjoyed a terrific season but has had some issues defensively. Roberts has really stood out in a weak Titans team, using his blistering speed to be one of the competitions leading try-scorers. He’ll take some catching in the final three weeks.

If the season finished a month ago Austin would have easily won this category but his form has deserted him just a little. Bird has made a huge difference to the Sharks and Milford has got better the longer the season has gone. But Morgan has to be the pick here having shifted back to the halves after a couple of seasons at fullback. He has proved a handy side-kick for Johnathan Thurston and has size for a half but blinding speed to boot.

I’ve listed three other contenders here for consistency’s sake but Thurston will win this even if he fails to play another minute. The Queensland and Australian star has enjoyed one of his best ever seasons for the Cowboys and will be odds-on to win the Dally M Player of the Year yet again in 2015. His consistency and will to win has almost single-handedly carried the Cowboys to the pointy end of the table and will be gunning to bring a premiership to Townsville.

So good have these four props been in 2015 I haven’t been able to include Storm and Kiwis prop Jesse Bromwich or test star Matt Scott. Matulino has stood out in an average Warriors side. Tamou has returned well since surgery on a troublesome neck injury. Woods and Waerea-Hargreaves are pretty well neck and neck but the former will struggle to get back on the field with a knee injury. Waerea-Hargreaves has take his game to another level in the past month and looks set to pick up the accolade.

Hodgson has been a real find for the Green Machine while Rein has started to realise his potential with the Dragons this season. Granville has taken his opportunity with the Cowboys with both hands and made a huge impact on their form this year but the wily old veteran Ennis must surely win hooker of the year. He has found a home at the Sharks this year and has inspired them to a storming run into the playoffs.

Frizell produced a superb first half of the season but has not had the opportunities in the second half to further his case. Thaiday responded to some early season criticism and Cooper has been fantastic playing alongside Thurston at the Cowboys. I’ve gone with the super consistent Jackson has the best of the bunch so far. He looks like a rep player for a long time to come and has been a consistent best of the Bulldogs in an up-and-down season.

Mannering has been his consistent self even in an ordinary side this year. Taumalolo has been bruising but missed too much time to win the award. Taupau has come on leaps and bounds but Parker just seems to get better and better despite his age. He should win the award for the second year running after another tremendous season for the Broncos.