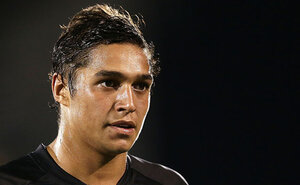 Penrith Panthers rookie Te Maire Martin is about to cap off an incredible first year as an NRL player with a trip to the UK as part of the Kiwis’ Four Nations squad.

Season 2016 could have been even better for the Tokoroa-born playmaker, had a fractured shoulder not halted his NRL progress after just six games.

Kiwileaguecentral.com sat down with Martin near the end of the club season to discuss his speedy comeback from what was meant to be a season-ending injury, the prospect of playing with Nathan Cleary next year and how a chance trip with friends gave him his opportunity in league.

KLC: Let’s start with the injury – a fractured glenoid (shoulder) which was displaced – it’s known to be very painful and the recovering is often tedious. Was this your first experience with a serious injury?

TMM: Yeah it was actually the first broken bone I have had, so it was a bit of a shock to the system. But I learnt from it and it was probably good to get one, because it happens to everyone at some stage.

The positives out of it were that I was meant to be out for the year but got to come back and play a few more games before the season finished. There is always a positive with these things and that was it I guess.

You were only six games into your NRL career, and were playing some good footy, so that must have made it even tougher to deal with?

It was pretty hard to deal with. When I was in the sling I couldn’t really do too much, so there was a lot of hours spent just sitting at home and thinking about what I should have done or what I could do. But as soon as I got out of the sling there was a lot of training going on and I could kick the ball and that kind of stuff.

I had good company around though, I was staying with Matt Moylan, the Penrith captain, and he was pretty helpful, and the other boys around the club were helpful too.

You hear of guys being able to use that recovery time to improve other areas of their game, was that the case for you?

Yeah I worked a lot on my kicking and it has definitely improved as a result, but there’s always room for more improvement. But that extra time and dedication got me started on looking up, kicking to space and sometimes looking at kicking early.

Kicking was the main thing I improved. Obviously I don’t have very big shoulders so I didn’t lose too much muscle, so that was a positive!

Watching Nathan Cleary excel in the halves in your absence must have been a bittersweet experience. Have you had the chance to play with him since arriving at Penrith this year?

I have never played with him! I have trained with him a bit, and he is a superb talent. Hopefully one day I will get to play with him, but who knows when that will be.

That was actually what made me go a bit harder coming out of rehab and recovery with the injury. Seeing how well he was going made me just want to get back out there and play footy again.

You were born in Tokoroa, is that where you spent most of your childhood?

I was born in Tokoroa but then we moved out to a place near Kawhia. I went to Hamilton Boys’ High School and stayed with my step mum from when I was pretty little onwards, so I only went home for school holidays.

I spent most of my time living in Te Awamutu or Hamilton.

Growing up you played union, so at what point did league come about?

It was all rugby union as a kid, even through until high school. But in my last year of school I went and played rugby league with a few of my mates at a tournament, got selected in the tournament team and then my aunty was actually working at (rugby league nursery) Keebra High School at that stage.

She gave me a free trial over there and that’s how it all happened, it all went from there because they are a feeder school for the Wests Tigers (where he played U-20s before signing with Penrith this year).

I played union and rugby league for a while at school and then it came to a time where I had to choose; either play finals in rugby league or finals in union. I ended up choosing league and lucky I did, because it has led me to where I am now.

Tokoroa seems to be an endless conveyor belt of athletic talent, with so many league and union stars in particular coming out of that town. Did you reflect on that and some of the famous names you were following in the footsteps of when you made your NRL debut?

I didn’t really, because I played mostly union growing up and wasn’t aware of that stuff. But obviously there is a lot of talent coming out of Tokoroa and the Turangawaewae club.

If you get the opportunity – like me – it can lead you straight to it. It was pretty much luck for me with how all that happened, but I bet there is a lot more potential at Tokoroa right now.

Even (Sydney Roosters rookie) Joey Manu is from there. I actually played rugby union with his brother, but never played with Joey! He is going really well though.

In your bio on the Panthers’ website you state that your goal is to “be good enough to play at least 10 years of NRL and stay injury free”. The injury part is something you don’t hear many young players consider, or worry about, so what prompted that response from you?

I just think there are a few injuries out there that can end people’s careers and it’s important. Benji [Marshall] had a few injuries – and like my recent one they were shoulder injuries as well – so I just really want to look after that stuff and play as much footy as I can.
About author