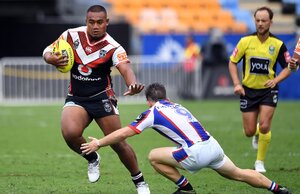 Soane Hufanga made his National Youth Competition debut in Round 1, putting in a strong effort to run for 110 metres in a 48-10 loss to the Newcastle Knights. Kiwileaguecentral.com shared a few minutes with the powerful forward in the minutes after his U-20 debut for the Junior Warriors.

KLC: How did you find the style of the NYC during your debut?

SH: It was pretty quick, way faster than other comps I have played in and local and school footy, but you get used to it.

It was a proud moment for me and reward for all the hard work I put in over the pre-season. I am very grateful for the guidance of the coaches and my parents, which has helped me to get to this point here.

You played your college footy with St Paul’s, you must be proud to play your part in continuing the school’s amazing league tradition?

For sure, for sure, and I am hearty 183, I love my school and I love whatever jersey I put on. It’s good being here today representing my family and friends and St Paul’s. There were quite a few of the family and friends who came out to watch my Junior Warriors debut.

You debuted against the Knights, who you were signed with initially last year, what happened to bring you back to Auckland?

Yeah, I spent last year with them playing SG Ball. That was a good experience but it’s nice to be back home around family and friends and getting that support.

I wanted to come home and be around them. I am back home and working now, and helping out my parents which is great.

You played for Ponsonby, Mount Wellington and Richmond growing up, but it’s at the latter that you really found a home in recent years?

Yes, Richmond is my club and I love Richmond and I am a hearty Bulldogs boy, but I am going to Pt Chev this year to play with my older brothers and experience footy there. Hopefully I will be playing Fox or reserves while I am there, getting amongst it with the bigger boys.

The Junior Warriors are made up entirely of NZ players, have you played with many of the guys before?

This Junior Warriors team is basically all the boys I played with in the younger grades growing up in Auckland. I have played with most of these boys since about U-14s.

With Dylan [Tavita] and Chanel [Harris-Tavita], I have played with them since U-7s all the way through to this point, so it’s a very proud moment for us.

Finally, what are the goals for season 2017?

I just want to hold my spot, get my performances up and get fitter, which is something I need to do.
About author