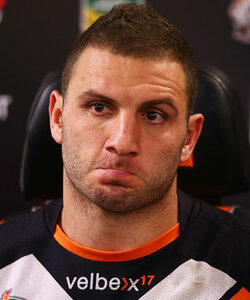 The Wests Tigers are making the right decision in trying to offload Robbie Farah. Their way of publicly handling that situation has been piss poor however.

Farah, at the age of 31, is heading towards the twilight of his career. If his 2015 form is anything to go by, he may well have hit the twilight zone already. He also is one of the few remaining players that were at the club in more successful times, which is not always a good thing for a club in rebuild mode like the Tigers.

By all accounts Tigers coach Jason Taylor spoke to Farah yesterday and told him the club wanted to go in a different direction next season. He has two more years to run on a contract that Farah himself admits is heavily back-loaded. The Tigers have said publicly they have no room to move under the salary cap. You cannot possibly criticise the club for coming to this conclusion. Farah’s skills are declining, his contract is a burden on the club and in Manaia Cherrington, they have a handy and much cheaper back-up.

Farah has been a tremendous player for the joint venture club, playing close to 250 first grade games and captaining the side in recent seasons. He has been a loyal servant and deserves to be treated better but this is a cutthroat business. In a hard-capped league, if a club shows some loyalty at the expense of being prudent, they are essentially handing an advantage to their 15 other competitors.

The Tigers will be much better for moving Farah and his big contract out the door. They can promote a younger, talented player to replace him, give themselves some cap space to sign players in areas where they are short and continue to rebuild without having guys from an era that is now officially in the past.

Having said all that – after making the smart footy decision the Tigers have made themselves look foolish by not elaborating on that move. Taylor attended an awkward press conference where he would offer nothing other than one line “we have given Robbie permission to negotiate with other clubs and will have nothing more to say until there is movement on it.” Taylor would not (or was not permitted to) answer the obvious question – “why has the club made this decision?” What was the point of a press conference if you can utter only one line? They leave the situation open for speculation, which is crazy. If they explained themselves fully, any fan would have to understand their reasoning. By hiding from the decision publicly, they actually look like they’ve dumped on their most respected player.

So what now for Farah? He surely wouldn’t be an attractive acquisition for any of the sides currently trying to rebuild. An aging star, expecting big money for a couple of farewell seasons hardly represents building for the future. For that reason teams like the Titans, Raiders, Eels and Knights should be out of the running. Many sides won’t have the cap space to fit him onto their 2016 roster unless the Tigers eat the majority of it, which would be pointless unless there are deeper issues than salary cap pressure at play here. The Broncos, Bulldogs, Cowboys, Roosters, Storm, Dragons, Warriors, Panthers and Sharks would have no need to sign Farah given the talent they already have in the hooker position, which leaves only the Rabbitohs or Sea Eagle as a potential destination. The defending premiers have waved goodbye to Issac Luke next year and have a talented youngster in Cameron McInnes ready to take over. They could be tempted to add Farah to the mix if Farah was prepared to play for a contender but accept less money in order to do it. Manly are reportedly ready to move on from Matt Ballin next season, whether they would want a slightly better version of him as a replacement remains to be seen. A smarter ploy would be to find a younger hooker to build into a long-term spine featuring Daly Cherry-Evans.

There is the possibility he could head to the UK Super League, where presumably there would be a demand for his services and the money available to pay him but would Farah accept a move halfway around the world?

The bottom line here is that Farah has a lucrative contract at the Tigers, they are obliged to honour it for the next two season and that remains the most likely scenario. The threat of playing reserve grade could push the NSW hooker into accepting a reduced contract elsewhere with the possibility of playing for a contender something of an incentive.

Either way this saga has only just begun.