Sam Lisone is two years into a promising NRL career, and is forging a reputation as a rugged and aggressive front-rower who can also play through the back row. A co-captain of the premiership-winning Junior Warriors squad in 2014, Lisone has represented the Junior Kiwis and Toa Samoa at representative level to date.

Kiwileaguecentral.com spoke to Sam about his inspiration, dominating the middle of the park despite being smaller than most opponents, and trying to emulate Warriors packs of years gone by. (Main photo: photosport.nz).

KLC: You have come into the Warriors’ system at a time when there are a couple of big names in the front row in Ben Matulino and Jacob Lillyman, who has been the biggest influence for you so far in terms of fine-tuning your game as a bookend?

SL: There are two props I have got close to and they have sort of shown me the way. Benny Mats and Sam Rapira. Sammy isn’t with us anymore but he taught me a lot, mainly around the fact that I’m not big like Benny or Bull, and neither was Sammy, but he carried with mana. Myself and Benny are pretty tight on and off the field, we are roommates on away trips too and I just try and take as much from him as I can. He is a cool guy, nice and chilled.

And growing up were they the guys you tried to base your game around? Or someone else?

Yeah it was ‘Sammy Raps’, just the way he carried the ball – shoulder first – so I always try and do that now.

At 184 cm tall and 102kgs you are hardly big compared to most props these days. Were you always taught to incorporate a bit more skill into your game in order to survive in the front row?

I sort of knew myself, I have always had an aggressive mindset but some days I just knew there were bigger guys out there than me, so I had to beat them in another way, and that was usually with leg speed or with skills. I need to keep working on those things, I think they are my strengths.

You mention that aggressive mindset – and it’s clear to see on the field – has coach Andrew McFadden tried to reign that in with you, or does he encourage it?

‘Cappy’ [McFadden] just tells me to go hard and that’s what I do. I try and put that fear back into the Warriors, if you look back in the days when everyone used to talk about the Warriors it was all about ruthless forwards who ran hard all day.

That is a hard reputation to live up to but I think that’s what I want to be, something like them.

How important has it been to have some of those older guys around you on the park to find a balance with that?

Yeah very, especially around young loose front-rowers like me and Albie [Albert Vete], we just run out there headless – and Charlie [Gubb] – we are going around trying to get people, but it’s good to have guys like Simon Mannering to tie us up in the middle.

They do it at training too and I mean Simon…he just does a lot of things no-one but the boys in the team sees. He does so much and means a lot to us. I want to be someone like that, with what he does in the middle, makes 50-odd tackles and doesn’t complain. 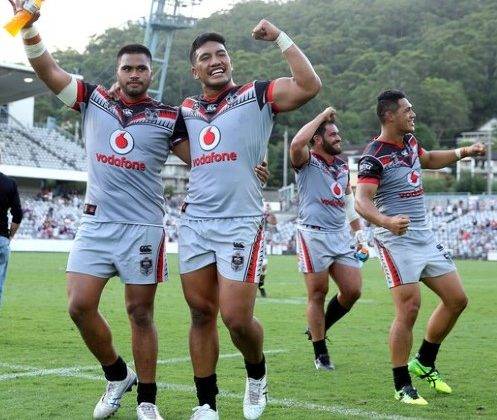 Lisone and Albert Vete after the Warriors beat the Roosters in golden point, Round 5, 2016. Photo: photosport.nz

You have spoken about how much you enjoy coming up against renowned front-rowers and guys who have played at rep level, when you prepare for those games do you alter your style for each individual player in terms of how you think you can dominate him?

Not really, I try and play the same every week and just carry the ball hard and obviously play with a bit of skill. I just have a look at who they are but I don’t really go into depth on them, it’s more about what I can do myself to give to the team.

I just need to be consistent all this year, it’s one of my goals to string a few good games together.

The crowd at Mt Smart Stadium have quickly taken to guys like yourself and Charlie Gubb, with your hit-ups regularly receiving loud applause, how much do they factor into your thinking during games?

A little bit and along with my family. I know the faithful and where they sit each week, who are with us no matter what. The fans are always in my head, they deserve results, they come out and watch us in the cold and all sorts and have been with us through a tough two months this year.