In his pomp Francis Meli was one of the most devastating wingers to put on a New Zealand Warriors jersey. A prolific try-scorer and a brutal hitter on both sides of the ball, Meli enjoyed a 16-year career in both the NRL and Super League.

Kiwileaguecentral.com caught up with him recently to discuss life in 2017, aspirations to coach at the highest levels and thoughts on the current state of the Warriors.

KLC: Since hanging up the boots you have been busy pursuing a career after footy, tell us about that to start with.

FM: I am working for the Henderson Police, pretty much covering the whole of west Auckland working in the area of intervention. I am working with kids in primary school from the ages of five to 16, and that’s mainly in a mentor role and making sure they stay away from offending.

It’s pretty much about putting them back on track and setting short term goals and helping them to achieve what they want to achieve.

How much of your passion for that work is influenced by your own experiences growing up in Auckland?

I grew up in an age group where I was lucky enough to go another way, but the majority of my friends ended up in prison. I still see them now and we are still mates, but they know they made their choices and that is just the way it is. That is the reality, and it’s just making kids understand that the dark path they take only gets darker, so why go down there? Try to go the other way and you can only go up.

I remember back in my day the local park would be jam-packed with kids trying to run around and kick the ball around, but nowadays you barely see that. Youths are hanging around shops or walking around the malls, so I looked back and realised I used to be one of those kids at one stage, but was lucky enough that I had good role models who got me into sport and kept me busy and active.

It was a no brainer to put my time back into that.

Despite playing for Marist growing up, you have linked with the Glenora Bears upon your return to NZ. Was that a tough decision to make?

I am a Marist boy hard, and I was very stubborn that way. But as soon as I started working in this community and the schools in west Auckland then it was important for me to look after my own backyard.

I lived out in west Auckland for a long time but chose to go and play for Marist. Marist understand that and one day I will go and help them out.

What type of work have you been doing with Glenora so far?

Last year I brought a restricted team up to play U16 open, which was a big ask for them. But I said that if they came up I would teach them a lot of the skills and all that, and that later on in the season they would discover with the game that it’s not about size, and that it becomes easier to work together as a team when they are all on the same page.

I came in with a fresh perspective on developing kids, and I said that to be successful you have to build a winning culture. That starts from the juniors upwards.

First of all it was about teaching them to overcome fear. When you pull a kid out of restricted to play open, well there’s a reason they played restricted and that is because of the size factor. When you put a big boy in front of a small boy then fear is going to be his first feeling. It’s breaking down the barriers and making them realise that size doesn’t matter.

We finished with one of the best defensive records of the season in our group. I adopted a very similar approach with the Akarana Falcons ladies, and I think at the national tournament last year we played six games and only leaked 32 points.

On the coaching front, do you have aspirations to test yourself at higher levels, and eventually in a professional competition?

Yeah definitely, I have got a five-year plan. I want to go back to England and coach there at a certain level. At the moment I am doing all my coaching papers, hopefully I can finish the last one in March over in Aus. But there is no rush with it, it’s all about taking this journey.

I have always liked the idea of going back to England, I lived there for nine years and it’s an important place in my life. I have got a lot of contacts back there.

What is your philosophy or style as a coach?

I harp on about fundamentals, but it’s true. When you are under pressure, and no matter how bad the team is, the one thing you can rely on is going back to basics. I see certain players doing the same thing wrong, and you have got to ask the question around whether they know what they are doing wrong.

You had plenty of coaches across your career, who stands out as the best?

Then he realised it was a whole different culture in New Zealand. He was a teacher before coaching, and the good thing about Daniel was that when he used to greet you in the morning he would ask how mum or dad was, using their names, and he knew what they did. People were amazed by that because it showed he was actually interested in players’ personal lives.

He did a lot of things for parents in our side, he and Sir Peter Leitch would put on BBQs so parents who were waiting for their kids late at night had something to eat. He understood what some families had going on in the background in Auckland, and he just had the right mix; knew how to push people’s buttons to get results in positive ways.

You’re 37 now, but do you still hold any desire to play local footy here in NZ?

I don’t want to play at this stage because of the kids and the fact that I want to give back. I have been approached a few times about whether or not I want to play, but the goal in my mind is that there is something greater I want to achieve.

That’s not being stubborn or arrogant, but for me to play would be taking a lot of my time and it would be selfish for me to do both at this stage.

Next year the police have got the World Cup and they have asked if I want to play, and I am honoured by that. It is part of work and when you get the opportunity to represent your country again on a higher stage, now that’s hard for me to say no to. It’s a one off and I don’t mind playing that. 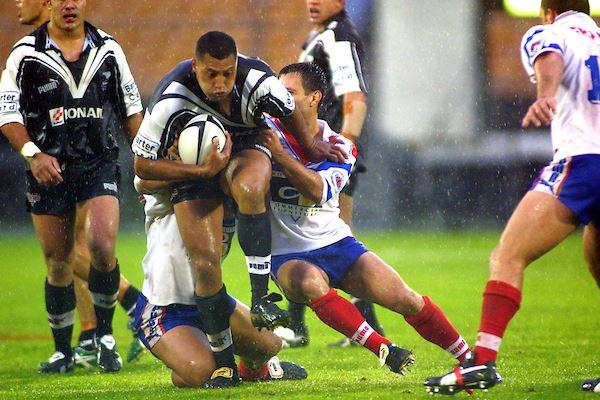 Meli attempts to break through the tackle while playing for the Kiwis. Credit: photosport.nz.

You had a run out with the NZ Police team last year as well, tell us a bit about that experience?

We played the Australian Defence team, it was the first time I had played in a while and the lungs were stinging. We had a good mixed team and it was fun to be among those guys, and a few of them had questions to ask me. That was nice being able to help them out

In the international arena you represented both New Zealand and Toa Samoa, which was the better experience for you?

Probably the Kiwis. When I got in with them there was a really good vibe. Everything was done professionally, everyone had goals and we were out for the right reasons. From players, to management, everything was 110 per cent, nothing could go wrong and all you had to do was turn up with the right mentality.

With the Samoa team it was always good to represent that side of my family, and the passion was there, but a lot of things were missing. In the team environment when you don’t have those things tied in then you are always on the back foot.

And back at club level, playing for the Warriors, St Helens and Salford, where did you enjoy your footy the most?

As a young fella, the time with the Warriors early on was the highlight. The success I had later in my career with St Helens, I wouldn’t have got that without the knowledge and the maturity I picked up as a young kid in Auckland.

As an outsider, what is your take on what has gone on at the Warriors over the past five seasons?

I was there in 2004 and we went through a real tough patch, it’s not nice trying to walk around the park with your dog and people are cursing you from the road. That alone rocks your confidence. But I think the biggest thing for the Warriors is that they have to stay tight as a group and everyone has to buy in to what you are trying to achieve.

It doesn’t matter if it’s a player, a coach or a trainer, if someone isn’t on the same wavelength then it becomes a cancer. Once you lose track it’s very hard to try and get back and you end up playing to survive.

And do you think Stephen Kearney is the man to fix the problems at the club?

The thing about ‘Mooks’ (Kearney) – and I know him really well from our playing days – is that he is a very professional person who is passionate about the game and passionate about his performance.

I know he will want to do the job 110 per cent, the way it should be done. he will make a few changes and it’s probably going to be a positive going forward. He brings a fair bit of experience from Parramatta and Melbourne, and he’s just come back from the Broncos with Wayne Bennett, and he will have learnt a lot off him.

He has got the perfect balance. It’s a tough journey, you don’t take that type of role for security, you do it for a challenge. Mooks is about passion and that is the challenge he is after.
Reactions: Harlz, Warrior482, eudebrito and 1 other person
About author