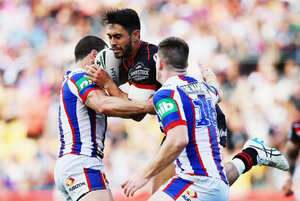 The Warriors came back twice to secure a 26-22 victory over the Knights in Round 1, here’s how we rated each player’s performance.

The Warriors’ best to open the season, just as he had been through the two pre-season trials as well. Ran the ball 21 times for over 250 total run metres, set up a try for Solomone Kata and made the crucial long-range break off his own line which led to the match-winning try. 8.5/10

Had a really good day on the wing, forcing a pair of repeat sets with clever kicks under pressure and setting up a try for David Fusitua, with a leaping effort which was equal parts athletic and clever. 7.5

Took his tally to nine tries in three games against the Knights with a hat-trick in 13 minutes during the first half. Made three line breaks, ran for 95 metres and made 13 tackles without a miss. 8

It’s hard to stand out when your centre partner on the other side of the field scores three tries, but Kata was really strong on the left. Scored a try himself and powered through for more than 100 metres. 7.5

Committed a number of handling errors, including one on his very first touch of the ball, but recovered well to add plenty for the Warriors via his running game. While he delivered some value against the Knights, his errors have to stop or he will quickly become a liability for coach Stephen Kearney. 6.5

Did pretty much everything asked of him at five-eighth and set up a try along the way. His vision and speed allowed him to make a long-range break early in the second half, while he took plenty of weight of Johnson’s shoulders at times too. 7

His short kicking game was a strong point, forcing some good repeat sets, while he also set up two tries. One of his assists for Fusitua was a freakish pass. 7.5


"Johnson had eyes out the back of his head!"#NRLWarriorsKnights #NRL pic.twitter.com/wwFOM1aKs2

Good aggression early on, but he made a key error which led to Newcastle scoring their first try against the run of play. Was part of a pack which at times couldn’t stand up to what the Knights threw at them, but Vete looks a better player than in 2016. 6.5

Left the match early in the second half with a rib injury, but was reliable in the first 40. 6

Got through plenty of work in defence with 34 tackles and only one miss. Copped what appeared to be a nasty head knock late on. Had some sting in his hit-ups prior to that. 6.5

Played the full match on the right edge, swallowing up every runner then came his way for 37 tackles without a single miss. Ran for over 80 metres on the ball too. A good day out for the youngster. 7.5

One of his best games since joining the Warriors at the start of 2015. With Bodene Thompson carrying an injury and Simon Mannering off the field injured, he took it upon himself to become the dominant forward. A final count of 131 running metres will show he did that, while his match-winning try was the stuff of pure determination. 8

Only played 48 minutes before being taken from the field with a neck issue, yet the former captain still got through for over 100 metres and made 24 tackles. 7

Almost cracked 150 metres off the bench, a huge effort considering his legs are still lacking mileage due to an off-season issue with his hamstring. Added some vital experience to an otherwise youthful pack. 7

Much like Lillyman he delivered ideal punch off the bench, with 137 run metres off 14 carries. Finished the game with half a shirt on his back following a scuffle, and he brought some steel to the party. 7

Spent just over 20 minutes on the park and was solid for the most part. Got found wanting on Jack Stockwell’s try in the second half, but he was in good company, missing the defensive assignment alongside Bodene Thompson. 5.5

Looked a fair way off full fitness and was asked to play a foreign position (hooker) for most of his stint. Made 29 tackles but had some sloppy errors which put the Warriors under pressure. 5.5 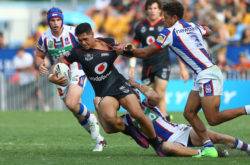