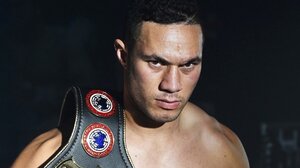 World champion boxer Joseph Parker is providing heavyweight support in the New Zealand Warriors’ corner after taking up an offer to be the team’s water boy at the NRL Auckland Nines at Eden Park on February 4 and 5.

The role was offered – and promptly accepted – during a surprise visit to Mount Smart Stadium on January 19.

He stunned the players when he greeted them in the gym as they returned from a field session.

Bedecked in the club’s 2017 Nines jersey (‘Te Toka Tu Toa’ – The Warrior Rock), Parker had his WBO world champion belt with him as well as the NRL Auckland Nines trophy.

While the players were understandably wary about getting too close to the Nines trophy (a prize they’re striving to win for the first time), the glittering world champion belt was irresistible.

“I wanted to come out to see the boys, see how they’re preparing for the Nines and just to catch up with them. I always support the Warriors,” said Parker.

“I want to be there at the Nines to help them and to cheer them on. If offer’s there to be the water boy, I will definitely take that on.
“Before the (title) fight last year they (Warriors players) were there to wish me luck and I’d like to do the same for them.

“Lots of the boys have been there for me. Manu (Vatuvei) has been one of my closest friends from the start and there’s Shaun (Johnson), Roger (Tuivasa-Sheck), Issac (Luke) and a few more. It’s good to see them working hard and it inspires me to do the same.”

A huge rugby league fan, Parker said he was especially thrilled about yesterday’s announcement that the legendary Ruben Wiki will line up for the Warriors at this year’s tournament.
About author