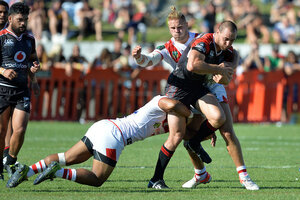 Simon Mannering has been named in the starting line-up for the first time this season replacing the injured Leivaha Pulu for the New Zealand Warriors’ seventh-round match against unbeaten St George Illawarra at Mount Smart Stadium on Friday night.

While centre Solomone Kata was also forced off late in the game with an ankle injury, he has been selected with head coach Stephen Kearney saying he is a chance to take his place.

Filling Mannering’s spot on the interchange is 44-game front rower Albert Vete, who is yet to play at first-grade level this season. After serving a suspension hanging over from last season, Vete has appeared in the Vodafone Warriors’ Intrust Super Premiership side in four of their last five games.

In the 34-4 win over the Sea Eagles last Saturday, he thundered 30 metres to finish off a superb long-range try, playing a total of 52 minutes and making 174 metres from 15 runs including 55 post-contact metres with six tackle breaks.