After the disappointment of Anzac day, the Warriors returned home to face a West Tigers outfit that has been on end of back to back defeats desperately looking to return to the impressive form they have shown in 2018.

This was not to be as the Warriors who were looking to make their own return to form made a statement with a resounding 26-4 victory.

The Warriors needed to bounce back from last weeks lacklustre performance, and I think they made a good step in the right direction.

The Tigers have been good this year but have found themselves in a slump, and the frustration in the team was clearly evident, giving away a lot more penalties than usual and making over twice the amount of errors that the Warriors did in this match.

Two sin-bins given to the Tigers did not help their case, and they never appeared to be in the contest.

Injuries to Issac Luke, Adam Blair and Shaun Johnson could be a concern, word from the club hasn't been clear, but it appears that Blair and Luke will be back next week with only Shaun likely to miss the Roosters match.

There is still a lot of room for improvement in this side, but they can hold their heads high after this match which leads me to my positives from the game.

The forwards fronted in this match, Bunty Afoa and Agnatius Paasi really got the pack rolling, and the welcomed return of Tohu Harris added some much-needed starch to the right edge which was heavily exposed last week.

With the momentum the forwards gifted them the backs were allowed to run havoc, the right edge continued to show how threating they can be with David Fusitua strolling over for his 11th try of the season.

Shaun's return from injury was brief, but it was good to see him attacking the line again.

This adds another dimension to the side; the Tigers struggled to mark and defend Shaun, Issac, Roger and David and I think many teams would have issues containing this side when they are in the right mindset.

I'm hopeful that Shaun will be back sooner rather than later but at least Mason Lino can fill the void until his return.

Roger continued his excellent form with my highlight being his spot tackle on David Nofoaluma, he is really showing his commitment to this side, and it is clearly infectious as when he goes up a level the rest of the team follow.

After leaking all those points against the Storm, the Warriors really need to keep the opposition scoring to a minimum, so they get their points differential back up to a decent level.

This season is tight, and every point really does matter.

The game wasn't perfect, and the Warriors still have plenty of room for improvement which leads me to my negatives.

I really only have one, which is the same one I have every week.

Missed tackles are still concerning me, Tohu Harris's return helped protect Peta Hiku, and the scrambling defence is saving them at times.

It's not an end of the world issue, but if Tohu Harris were to get injured again, I would be really nervous about the right edge. 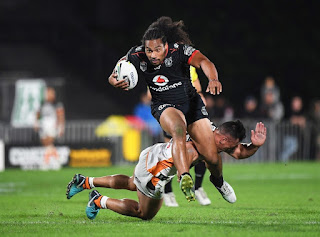 Copyright Photo: www.nrl.com​
My Warrior of the game goes to Bunty Afoa.

I have been so impressed with Bunty this season, he has really blossomed into a genuine starting front rower, and he is continuously giving it 100% on all his hit-ups.

He doesn't shrug his defensive responsibilities, and his intensity is the key to his success this year.

The future is bright for Bunty, he's young and hungry and is quickly becoming another cult hero at Mt Smart.

If Sam Lisone and co can bring themselves up to Bunty's level, I think the Warriors pack could become an intimidating outfit.

I look forward to watching Bunty grow in his role at the club, and I can see him develop into a future leader of the Warriors pack. 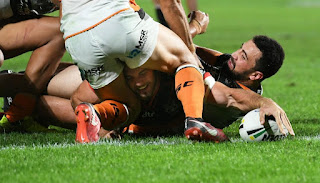 Copyright Photo: Photosport​
I don't have a Warrior to improve this week, but I want to highlight Karl Lawton.

When Issac injured his shoulder, Karl got 25 minutes to show the Warriors fans what he can offer, and he did not disappoint scoring a double.

What impressed me was his quickness, when he saw an opening he went for it and the Tigers were not quick enough to react.

It was only 25 minutes, but I saw enough to have Karl as the second string hooker for the Warriors if Issac cannot return for next weeks match against the Roosters I believe Karl will not let anyone down if given a chance to start.

At his young age, he could very well be Issac's long-term replacement when Issac either leaves the club or retires (if he re-signs with the Warriors this season).

The win here keeps the Warriors in the Race with the rampaging Dragons at the top of the ladder, and if the Warriors can continue to deliver, they could find themselves in the top spot when the Dragons inevitably get depleted during the Origin period.

The Warriors now have seven wins, the same amount of wins that they managed last season and they show no signs of stopping.

There is still a long way to go in 2018, but I think the Warriors have the potential to go deep into the finals if they can keep consistent and relatively injury free.

Round 10 is the NRL Indigenous round, and the Warriors get their first chance to host as they welcome the Sydney Roosters to Mt Smart.

The Roosters are a dangerous side, but I think the Warriors will be too much for them and I'm picking the Warriors to win by 12.

So that was my take on a triumphant return to the winner's circle, and as usual, I will leave you with some questions.

Would you start Simon Mannering or keep him on the bench?

Who was your player of the match?

Do you think this side will be a top-four side come round 25?

What is your score prediction for Round 10?
About author