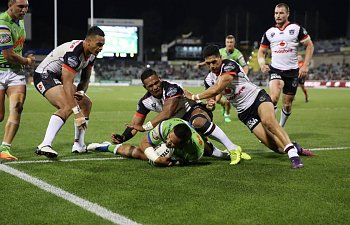 Copyright Photo: www.gettyimages.com.au
​
The Warriors made the journey back to Australia after the back to back victories at Mount Smart to face the Canberra Raiders.
Playing the Raiders in Canberra is no easy feat and the Warriors would need to bring their A-game to tame the rampant Raiders attack.
The Warriors did front for the first half of the match but fell back into their old ways in the second half and lost 20-8.

It truly was a cliche game of two halves, the Warriors started the match strong and with purpose.
Ryan Hoffman got on the scorecard first after snatching a Kieran Foran bomb out of the sky.
The Warriors continued to pressure the Raiders, forcing them to defend three sets in a row but could not break the Raiders line.
The Raiders started to get themselves in the game with their large forwards testing the Warriors with each hit up and offloading at will, this lead to powerhouse centre Joseph Leilua scoring with relative ease in the corner.
Both sides traded sets with neither team gaining the upper hand, the Warriors had two tries from Roger Tuivasa-Sheck and Solomona Kata disallowed but did manage to convert a penalty goal to take the half-time lead 8-6.
A completely different Warriors side came out in the second half, they appeared sloppy and lacked the handling skills that had been so improved in previous rounds.
The Raiders started to dominate the match and the Warriors appeared to be in trouble when Leilua scored his second try.
The Warriors just could not get themselves back into the match up and Josh Hodgson sealed the deal when he scored the final try of the match taking the Raiders to a 20-8 win, keeping the Warriors winless in Australia. 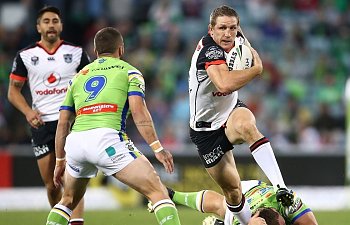 Copyright Photo: www.warriors.kiwi​
My Warrior of the game goes to Ryan Hoffman, in a disappointing game for the Warriors, Ryan was one of the Warriors that was played strong in both halves, he was by no means perfect missing tackles that he would normally make, he countered this with a stronger running game being one of only two forwards to run for over 100 metres in this match.
With no contract in place for next season but a strong desire to play on, Ryan has been playing at an improved level compared to last season, with Tohu Harris coming over to the Warriors I wouldn't be signing Ryan to a contract extension anytime soon but if no other teams offer him a deal there may be a chance to grab Ryan for a very good price and it may not hurt the Warriors chances in 2018. 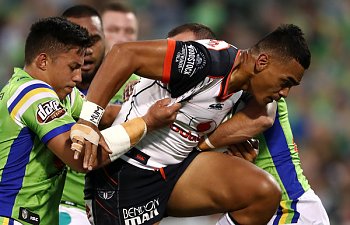 Copyright Photo: www.gettyimages.com.au
​
My Warrior who needs to improve was tight this match but I have given it to Ken Maumalo, Solomona Kata was close to getting it again this week but Ken just edged him this round leading the games error count and not having the best day under the high ball.
Screams for Ken’s head I feel are uncalled for right now, Manu is still out injured and if the forwards perform like the did in this game again the Warriors will need Ken to help with the hit ups out of their own half, in what was a poor performance for Ken he still managed to get 154 metres, second most in the game for a Warriors player.
Ken is never going to be a game breaker but he is a strong runner that plays with confidence and he will learn and improve from this performance.

So after a somewhat impressive first half, the self-imposed implosion in the second half did come as a surprise to me, but the Warriors did themselves no favours in this match with their terrible error rate.
In the first half they made 4 errors coupled with a staggering 13 errors in the second half, throw in 37 missed tackles and simply the Warriors painted themselves into a corner and could not fight their way back out.
The referees did not have the best game with some calls going against the Warriors that seemed peculiar to say the least, Roger’s try not being allowed was outrageous however with the way the Warriors performed they did not deserve the victory.
I was also concerned with Stephen Kearney’s interchange mindset in this match, he took longer than normal to bring Sam Lisone on, he also brought Nathaniel Roache on early but did not bring Issac Luke back out, Roache did not bring anything to this match that deemed worthy on a prolonged time on the pine for Issac.
With the large forward pack the Raider possessed the Warriors needed to take advantage with the quick play the balls and dummy half runs that the Warriors have shown the past two performances but for some reason they clocked off at half-time, taking nothing away from a Raiders side that has shown themselves to be very capable, if the Warriors kept playing the way the did in the first half they could have walked away victorious.
But the fact of the matter is that the Warriors didn't and they lost as a result.
The Warriors have extra days to think about this performance and prepared for their Round 8 showdown on Anzac day in Melbourne against the Storm.
After last years embarrassment on Anzac day, the Warriors will need to be firing on all cylinders to ensure they get their first win on Australia soil for 2017.
I feel the Warriors are going to come to the party on Tuesday and get the much-needed victory and I am picking the Warriors to win by 6 in a close encounter.

So that was a disappointing Round 7 and as per usual, I will leave you with some questions.

What do you think was the reason for the Warriors switching off at half-time?
Would you make any changes to the side after this result?
How do you see the annual Anzac clash going this year after last years humiliation?
When would you bring Ben Matulino back into the side?
Reactions: Centurion and Maddog
About author

Pretty much agree with all you've said.