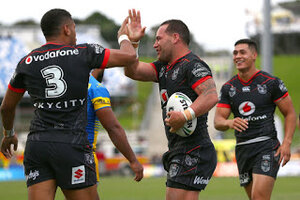 After last week’s closer than expected victory over the Gold Coast Titans the Warriors were once again playing at Mount Smart Stadium, this time facing the Parramatta Eels in a must-win encounter.
Losing here would see the Warriors sitting 2-4 with a hard mountain to climb to regain top eight contention.
A win would place the Warriors 3-3 and in a logjam with several other teams in the middle of the ladder still in control of their own playoff hopes.
Thankfully for the 13,526 fans in attendance, the Warriors continued their improved performance from last week with a solid 22-10 victory over the Eels.

Both sides started slow trading sets back and forth until the 20th minute where the Eel’s took advantage of the Warriors inability to defend an inside pass and angle change to pit Nathan Brown over.
This seemed to wake the Warriors up as the forwards marched them up the field and scored three tries in 10 minutes with Bodene Thompson scoring two and Simon Mannering also crossing taking the Warriors to a 16-6 lead at Half-time.
The Eels started strong in the second half with a Josh Hoffman try 4 minutes in, this started what felt like a Parramatta comeback attempt with two tries being correctly disallowed when sent to the bunker.
The Warriors defence stood tall and keep the pressure on preventing the Eels from crossing.
With less than twenty minutes to go Kieran Foran took advantage of the Eels lethargic defensive line and put Ken Maumalo over the line to seal the win for the Warriors 22-10. 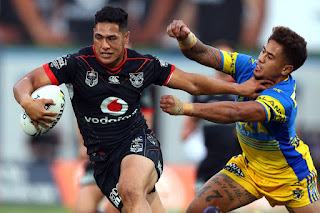 Copyright Photo: Renee McKay / www.photosport.nz​
My Warrior of the game goes to Roger Tuivasa-Sheck, it was a tough choice this week as there were many players who stood up in this performance but Roger was always safe under all of the Eels kicks and his returns started the Warriors sets off on a positive note, it got to a point where the Eels started kicked the ball out instead of letting him run it back.
He also created headaches for the Eels when he joined the back-line as a third play-making option.
If Roger can continue in this vein of form the Warriors will have the teams above them on the table carefully looking over their shoulder.

My Warrior who needs to improve, well this week I just couldn't pick one.
The team improved in all facets and although Solomona Kata isn't back to his form of last season he did improve on his performance from last week but still has a long way to go.
I would love to be able to never have to pick a player who needs to improve so hopefully this is the beginning of a trend. 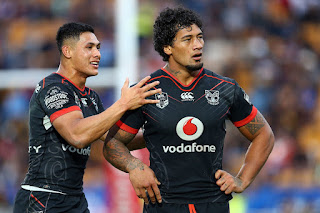 Copyright Photo: Renee McKay / www.photosport.nz
​
This was a refined performance from the Warriors, their ball-handling has improved a lot over the past two rounds.
A 95% completion rate in the first half is not a statistic we have grown accustomed to seeing from this side.
They did fall away a little in the second half but still ending the game on 82%.
The forwards fronted again and offered the back-line plenty of options to score, James Gavet and Sam Lisone continue to dent the defensive line at will, I don't really need to say it but the Forwards need to continue this if the Warriors are to succeed this season.
With Albert Vete and Ben Matulino due to return in the coming weeks, it is hard to pick players to drop for them as they are all performing.
Kieran Foran, Shaun Johnson and Roger Tuivasa-Sheck were running great lines and were able to put the second rowers into holes, three of the four tries were scored in this fashion, if Bodene, Simon and Ryan can keep running these lines the defensive lines will bunch up on them which will leave spaces for the centres and wingers to strike.
The Eels scored first in both halves but the Warriors didn't drop their heads and kept themselves in the game with their defence.
The Warriors attitude has improved tenfold, their defensive line rushed up to put the opposition under pressure and force errors.
A special mention does need to go to Roger Tuivasa-Sheck and David Fusitua who threw their bodies on the line to prevent Semi Radradra from scoring in the corner.
This defensive mindset needs to continue if the Warriors are to cement themselves in the top eight this season.
Although this game was far from perfect, there were passes that were forced and the Warriors gave the Eels too many piggybacks out of their own half unnecessary penalties.
These are minor issues to work on and seeing how the Warriors have improved the handling and defensive problems, they should be able to fine tune their performance to stamp their mark on the NRL in 2017.

The Warriors travel to Canberra to face the Raiders in Round 7.
The Raiders also have a 3-3 record and playing in Canberra is never easy but if the Warriors can continue playing with their current mindset they should be able to get the result here.
I am picking the Warriors to defeat the Raiders by 10 points this Saturday.

So that was Round 6 and the first back to back wins for the Warriors this season, and as per usual, I will leave you with some questions.

What were your thoughts on the Warriors performance?

Who was your standout performer in this match?

How do you see the upcoming matched on Canberra and Melbourne going?

Are there any changes you would make to this side?

Let me know what you think
Reactions: Centurion, tajhay and Sup42
About author

Mooks was referring tonight how he likes the fact that the players are starting to put pressure on the incumbents. With Albie and Bennie set to come back in the next week or two there'll be a big logjam for middle spots. That can only be good for us!

Centurion said:
Mooks was referring tonight how he likes the fact that the players are starting to put pressure on the incumbents. With Albie and Bennie set to come back in the next week or two there'll be a big logjam for middle spots. That can only be good for us!
Click to expand...

Players fighting for spots is a great problem to have , if a prop is going to get replaced i feel right now it would be Gubb, compared to Lillyman, Lisone and Gavet he just isnt offering the same right now, they may bring Vete in for Gubb and possibly Matulino for Sao?