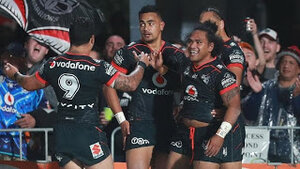 After two weeks playing away, the Warriors finally returned home to a sold out Mount Smart Stadium with an impressive 4-0 record to face a North Queensland Cowboys desperate to return to the winner's circle.

This was not to be as the Warriors welcomed back club hero Simon Mannering with a 22-12 victory to go 5-0 for the season.

It's hard for me to describe what it was like to be sitting in a sold-out crowd at Mount Smart once again and I really hope it continues. Having a doubleheader did help boost the crowd, but I hope the game day crowd continues to flock to the stadium for the next two weeks as the Warriors enjoy their current vein of form.

Teams across the Tasman are starting to take notice of the Warriors now and they should, the Warriors still have a lot of improvement in them but took the fight to the Cowboys and got the job done which leads me into my positives from the game.

The Warriors fitness continues to shine, from start to finish the Warriors kept on top of the Cowboys, on last tackle kicks the Warriors were up in the kick returners face and had already set the defensive line before most of the Cowboys were even back onside.

The forwards have continued to look sharp with Bunty Afoa impressing me again with strong runs, Leivaha Pulu and Tohu Harris have added so much to this sides attacking potential and this created opportunities for Solomone Kata, Ken Maumalo, Peta Hiku and David Fusitua to wreck havoc on the Cowboy's edges.

Simon Mannering returned on the bench, and once he was out there it was like he never left, the Warriors defence is still at times patchy, but with Simon back I believe this will improve impressively.

The goal-line defence is still a stand out for me, the Warriors ability to hold out repeat sets is going to help them go a long way this season, there is still issues (more on that in my negatives) but nothing that is a significant concern.

The Warriors spine continues to impress me, Shaun and Blake are working so well together.

Issac Luke is taking advantage of the great work being done by the forwards and punishing lazy defenders with some sniping dummy half runs.

Roger is growing into his captaincy and improves each and every week, he had a quiet night but still had an excellent performance, and his enthusiasm is infectious and rubs off on the rest of the squad.

This side is genuinely playing for one another; no one seems to be just playing for themselves anymore.

A good example of this was when Solomone Kata made a break and set Ken Maumalo up for his try; I can honestly say that if that happened last year, Kata would have tried to beat the fullback and go alone.

If this attitude sticks for the rest of the season, then it is going to be a fruitful 2018.

The bench impressed once again, Jazz Tevaga, Simon Mannering and Sam Lisone all contributed immensely with the minutes they were given.

Anthony Gelling only got a few minutes at the end of the game, so I can't really judge his performance, but he was really just on the bench as cover for Roger in case his arm wasn't up to scratch.

Many Pundits across the ditch keep trying to predict when the wheels will fall off the Warriors 2018 season but I believe that this side is a legitimate threat in 2018, and right now as fans all we can do is enjoy the ride.

As I said above, there is still improvement to be had which leads me to my negatives.

Once again I don't have too many negatives to point out, but I did notice a couple of slight concerns.

The Warriors let two soft tries through with a couple of poor decisions made, but the edge isn't as much as a liability as it has been in the past so im confident they will fix this.

At times it seemed that the Warriors were rushing which lead to errors, perhaps they were a little excited performing in front of a large hometime crowd, but it felt like they just needed to slow down and get back into the gameplan they had.

If the large crowds continue to flock to Mount Smart im sure the team will be able to keep their nerves in check.

This team has points in them they just need to keep moving forward, and the points will come, no game is won in the first ten minutes but the platform set early on will make the trip to victory a lot smoother.

My last negative is the errors, there were too many errors this week, with tough games coming up the Warriors need to cut back on unforced errors to give themselves the best chance to keep their unbeaten streak going. 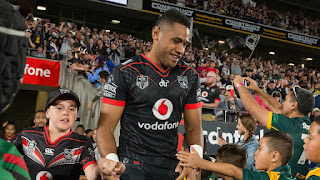 Copyright Photo: www.sportingnews.com​
My Warrior of the game goes to David Fusitua.

What a season David is having, scoring a double in this match takes him to seven so far for the season and leading the comp in tries scored and is already over halfway to his try tally last season.

David has been a constant threat, whether going through the air or running down the edge, it really doesn't matter he knows how to get over the line.

I may be counting my chickens before they hatch, but I think he is well on his way to scoring 20+ tries this year and staying the leading try scorer in the NRL this season. 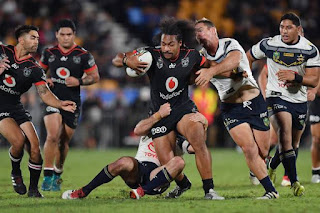 Copyright Photo: Getty Images​
No Warrior to improve again this week, so I want to highlight Bunty Afoa this week.

Bunty has been a wrecking ball this year, running big metres every match regardless of if he is starting or playing from the bench.

With James Gavet missing the last two matches due to injury Bunty has really stepped up and added much-needed punch up the middle.

I am hopeful that he can continue to perform at this level and if he does I find it hard for any of the forwards waiting in the wings to take his spot in the game day 17.

Round 6 has the Warrior again at home, this time facing the Brisbane Broncos.

The Broncos have had a rocky start in 2018, and I don't see them improving this round either.

Their halves are lacking cohesion, and the team does not appear to be working well together, so I feel that they are in a rough night hopefully in front of another sellout crowd.

Last week I can proudly say I got the correct margin in my prediction for the first time this season, so fingers crossed I can do it again this week.

Im picking the Warriors to go 6-0 and win this match by 12 points.

So that was my take on a great Round 5 performance, and as usual, I will leave you with some questions.

Do you think the sell out crowds will continue?

Would you start Simon Mannering this week?

Was there any player that you think needs to improve after their Round 5 performance?

What is your score prediction for Round 6?
Reactions: Gr8ful65
About author

Yes they will grow due to the simple brand of football they are currently playing and everyone loves winners.

2 reasons i believe simon should be a non starter
He didn't look comfortable and it's his 2nd game back though a positive is his injection in the game proved worthy.

Continue and believe in the breathing process! Noticed last week a couple of them with wayward looks on their faces of I am over this stuff just wanna play footy.