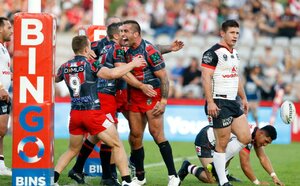 After claiming that last week's performance was the Warriors worst of 2017, the Warriors went out and proved me wrong by putting on a woeful display in their first outing on Australian soil losing 26-12 to the St George Illawarra Dragons.
In a milestone game for Simon Mannering where he broke Stacey Jones record of most games played for the Warriors with 262 matches, the Warriors should have been buoyed by the occasion and ready to go but in reality, they barely made it out of the gate.

The much-anticipated debut of Kieran Foran was delayed last minute when he pulled his hamstring in the final warm up.
With no halves cover with them in Australia Tui Lolohea was slotted into the halves with Blake Ayshford coming into the centres and David Fusitua moving out to the wing.
Both teams gave away silly penalties early on and both teams took the easy penalty goals.
Then after some poor ball protection, the Warriors soft defence was in full effect with Paul Vaughan busting through for the first try of the game.
More handling errors lead to the Dragons second try when Josh McCrone scored in the corner.
The Warriors continued to drop the ball every chance they were given and the Dragons took advantage with Josh Dugan strolling through the Warriors defensive line to get the Dragons ahead 20-2.
The Warriors forwards lacked serious punch against the large Dragons pack but with the injection of Sam Lisone and James Gavet the Warriors started to show some fight and when Gavet came close to scoring Issac Luke pounced at the opportunity the slow markers gave him and scored.
The tide turned a little in the Warriors favour but every time it looked like they were going to break through they dropped the ball leaving the score 20-8 at halftime.
Josh Dugan made an error at kick off and the Warriors piled on more pressure leading to a try to Ken Maumalo in the corner,
More back and forth followed between the two sides until Tim Lafai sliced the defence and scored the Dragons fourth and final try with the game ending 26-12.

My Warrior of the game goes to James Gavet, in his first outing for 2017 he was one of a handful of players out there that was making good runs and putting pressure on the Dragons forwards.
He brought a positive attitude that this side sorely needs, I feel that he should be taking Charlie Gubb's position in the Warriors 17 as he offers more on both attack and defence.
The fans always go on about the Warriors needing more mongrel and he has it in spades without giving away needless penalties.

My Warrior who needs to improve is Tui Lolohea, this game was yet another example of why he is not a half.
Stupid last tackle options and in some cases silly forth tackle options littered his performance.
In his defence, he wasn't expecting to play in the halves but that is the reality of professional football.
He still looks like a deer in headlights and with the talented players currently in reserve grade pushing for spots his time in first grade may be numbered.

This game was dreadful to watch, the ball handling was embarrassing (19 errors in total) and the defensive line was slow and unresponsive, there were so many times when all the Dragons had to do was change the angle of their run and the Warriors just opened up.
It was really no surprise that they missed 31 tackles.
The team ran onto the ball with no depth and when you play so flat you have absolutely no go forward to unleash the backs.
Stephen Kearney needs to take action now, a 1-3 record is something you cannot gloss over with cliche coachspeak.
Does he stick with his current side or make some changes?
I would be making changes now to give the reserve graders a shot and to wake up the top side players that are not performing.
I would swap Tui Lolohea for Charnze Nicoll-Klokstad, Solomona Kata for Blake Ayshford and Charlie Gubb for James Gavet if I was in charge.
The Warriors return to Mt Smart to face the Gold Coast Titans.
The Titans haven't looked that great so far this season so now is the time for the Warriors to turn the corner and get their season back on track.
I predict a decent win from the Warriors here winning by 12.

So that was a forgettable Round 4 and as per usual, I will leave you with some questions.

What players would you look at dropping?
Do you think the Warriors can turn the season around?
Is it time to give up on the Lolohea experiment?
What would be your advice to Stephen Kearney?

Let me know what you think and I will talk to you all next week.
Reactions: Centurion and koolkat
About author

Awesome
This is good stuff Brad - keep it up bud!

Looking forward to round 5 review and you take on some of the main 'suspects' - Foz, Luke and SJ's combination with Foz and the forwards, the revelation that Gavet is with his mongrel and 'punch' and the impact of the middles (albeit against a weakened but VERY competitive and desperate Titans)...

Centurion said:
This is good stuff Brad - keep it up bud!

Looking forward to round 5 review and you take on some of the main 'suspects' - Foz, Luke and SJ's combination with Foz and the forwards, the revelation that Gavet is with his mongrel and 'punch' and the impact of the middles (albeit against a weakened but VERY competitive and desperate Titans)...
Click to expand...

Thank you very much, Round 5 review just about to go up.