After last weeks breathtaking come from behind victory over the Raiders, the Warriors ventured to Sydney to face premier contenders the Sydney Roosters.

With Sam Lisone, James Gavet and Shaun Johnson out for this matchup, many (including myself) had doubts that the Warriors would be able to go 4-0.

But the Warriors did not allow self-doubt to come into play, and they made easy work of the Roosters winning 30-6.

The Warriors could be the real deal in 2018, they have struggled in the past to win without Shaun Johnson, in fact, this was the first time the Warriors have won without their star halfback since 2014.

When the Roosters walked over for an easy try in the first three minutes of the match I sighed, it looked like the Warriors of old were back again but that was the only time the Roosters competed in this match which leads me to my positives of the game.

The Warriors finally reduced the penalties conceding only eight, it would be great to reduce this further, but single digit penalties is an improvement from the first three rounds.

If the Warriors can continue to keep the penalties low while also maintaining the aggression that they have shown in 2018 they will increase their chances of winning tenfold.

I was also impressed that their 80% completion rate did not affect the ability to offload with the Warriors still having sixteen offloads for the match.

This takes the Warriors to the top of the offload leaderboard with 71 for the season, this shows that the Warriors are more refined with their off the cuff play, no longer throwing no hope offloads that they use to, this, in my opinion, makes them a dangerous side to deal with.

Issac Luke continued to threaten running from dummy half, Bunty Afoa was strong once again in his first start of the year, and the rest of the front rowers gave a good platform for the backs to work with.

Tohu Harris, Leivaha Pulu and Adam Blair were a powerful back row combination, and I feel that Adam Blair and Tohu Harris stepped up in Shaun Johnson's absence and added playmaking options to the Warriors.

I also liked watching the Warriors not take their foot off the Roosters throat.

In years gone by if the Warriors have achieved a good lead, they have had the habit of resting on their laurels and leaving the door open for their opposition to creep back into the match, but the resolve in this Warriors side is so different from the Warriors of the past 5-6 years.

The Roosters made a lot of errors in this match, and the Warriors took advantage, finetuning is still required as they have teams coming up that will not gift them as much possession.

The scrambling defence and goalline defence continues to shine week in, and week out, teams are struggling to find a way through and if the Warriors will need to keep this up with some tough opponents coming in the next four rounds.

The Warriors have looked strong after the first month of the season, but there is still a lot of room for improvement which leads me to my negatives.

To be honest, I don't have too many negatives this week, the right edge defence rushed in which lead to the Roosters try in the early stages but they did sort that out.

The Warriors defence seems to get better the closer they get to their own try line, but they can be exposed in the middle of the field, the Warriors have been able to cover for this with the scrambling defence but toughening up their defensive line in enemy territory is a must. Blake has been a standout in every game this year, but the way he lead this team to victory was great to watch.

He didn't overplay his hand, dealt a massive blow to the Roosters when he kicked a 40/20 when they were out of position and played to the high level that we have come to expect from him.

The way Mason Lino was able just to slot in and do his job is a testament to the impact Blake has on this team.

There are talks across the ditch of Blake possibly being a State of Origin call-up this season if his form continues, this would be great for Blake, but the selfish fan in me wants him to play for the Warriors in those rounds instead.

Blake currently in my mind is one of the best signings this club has made, and I believe the best from him is yet to come. 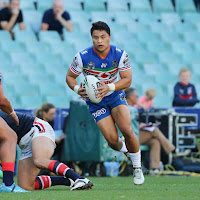 Copyright Photo: www.warriors.kiwi​
For the second time this season I could not pinpoint a Warrior that needed to improve, but I did want to mention Mason Lino.

Mason will most likely never be the Warriors (or any NRL club) go to halfback but when the situation arises Mason is never shy from giving it his all.

Mason is taking the opportunity to learn from some fantastic halves in the time he has spent with the club, and the growth he has shown in his game management is tremendous.

When the last tackle option fell to him, he was able to force repeat sets and put the Roosters under pressure which is what he needed to do.

100% goal kicking for the match as well as a try was a great way to cap off Mason's first ever first-grade win.

If Shaun ends up being out for more than just this week, I am confident that Mason can make the fans proud of his contribution.

Round 5 the Warriors return to Mount Smart to face the North Queensland Cowboys in an epic doubleheader on Saturday with the Melbourne Storm and West Tigers also playing at Mount Smart that night.

The crowd is bound to be a large one and will have some work to do to up the atmosphere that the Warriors fans in Sydney put on in Round 4 (big props to those fans, it sounded like a home game).

This match is the first of three in a row that the Warriors will play at home, and the Warriors need to make a statement.

I'm picking the Warriors again here with a 10 point win over the Cowboys.

I honestly can't wait for this doubleheader, some quality players will be on display in both matches, and it should be a great night, rumours are that this will be a sellout so it will be awesome to be in packed Mount Smart once again.

So that was my take on a well-executed Round 4 performance, and as usual, I will leave you with some questions.

If Shaun is still struggling with his groin would you rest him again this week?

Was there any player that you think needs to improve after their Round 4 performance?

What is your score prediction for Round 5?
About author