After guaranteeing a return to the playoffs with last weeks win over the Panthers, the Warriors were home once again at Mount Smart for the final round of the regular season against the Canberra Raiders.

Canberra came into the match as giant killers with recent wins against the Rabbitohs and the Roosters, so this was always going to be a tough match for the home side.

The pressure was on the Warriors with a sellout crowd there to celebrate not only the Warriors return to playoff football but Simon Mannering's 300th game.

It wasn't a pretty game, but the Warriors pulled through to ensure that Simon's last ever game at Mt Smart was a victory as they came away with a 20-16 win.

For the first time since I started writing my weekly reviews the Warriors are playing finals football, and as a fan, I cannot wait for this weekend.

This game wasn't a great game from the Warriors, but I think this tough contest was just what the Warriors needed in the lead up to week one of the finals.

The Warriors have struggled this year in matches with extended intros so with the much deserved prematch fanfare for Simon, and perhaps the Warriors let the occasion get to them however unlike those other times the Warriors showed git and determination and held on to get the win for Simon.

Before I get to my Match Positives, I just what to highlight Simon.

It is hard to describe the impact you have had not only on this fans life but all Warriors fans, in times when the Warriors were the laughing stock of the New Zealand sport, Simon was always spoken of in high regard because his class and dedicated was always evident.

Thank you, Simon, for everything you have done for this club, in the dark times you were the shining light, and it is excellent that the Warriors are in the playoffs for what it is your final year.

I hope you enjoy your retirement, but before that, there is still work to be done in 2018.

I could spend hours talking about Simon but back onto Round 25 and more on point my positives.

After 24 rounds of complaining about the missed tackles, the Warriors came through for me and delivered through lowest missed tackle tally for the year only missing ten in this match.

Defensively I thought the Warriors performed great, they were hitting the large Raiders pack and driving them backwards which did take some sting out of the Raiders set's, there was still the occasional lapse in judgement, but it was an improvement on previous rounds.

Despite less possession, the Warriors dominated the Raiders in run meters and tackle breaks, with Agnatius Paasi and Tohu Harris leading the way and the entire back five running for over 100 meters.

Speaking of Paasi, he also got to play more minutes but more on that below.

Also as mentioned above the match was tough which I think prepares the Warriors better for the playoffs than a blow out would have.

Once you hit that elimination football, there will be games where things don't go your way, and you need to dig deep to get the result.

The Warriors will be able to lean on this game (and come to think of it there first match up with the Raiders earlier this season) and use their experience in tough encounters to get the edge on the opposition.

That is all I have for my highlights right now (I always think of more after I upload) which brings me to my negatives from the match.

Even though the missed tackles were down the unforced errors were too high for finals football, they managed to keep the penalty count reasonably low, but now that they are into elimination football the Warriors will need to ensure they give the opposition possession as little as possible.

The execution of the plays seemed a bit off, perhaps the occasion got to them, or the safety net of their guaranteed playoff spot allowed them to got on cruise control at times, not a huge criticism however as when push came to shove the Warriors turned on and got the job done.

Shaun's goal kicking was a concern with Shaun only convert one of the three tries scored, every point counts, so Shaun needs to bring his conversion rate up to around the 80% from now on.

Lastly, in what seems to be my new pet peeve is Solomona Kata once again ignoring a huge overlap for Ken Maumalo and going it himself, he scored thankfully, but I feel that a butchered try is just around the corner and I don't want that to be the difference between winning and losing.

I will preach it until I die but the team comes before the individual.

Copyright Photo: Warriors.kiwi
​
My Warrior of the game goes to Agnatius Paasi.

Paasi had yet another strong game as I stated in my match positives.

Playing for 57 minutes and running for 177 metres, Paasi had a considerable impact on this match and put his hand up in my eyes to be in the discussion for best Warriors signing of 2018.

Paasi is always working, matching his big runs with plenty of tackles.

I'm hopeful that this form will continue in the upcoming weeks and that the rest of the prop rotation start to emulate it as the Warriors will be hard to stop with that kind of platform being set. 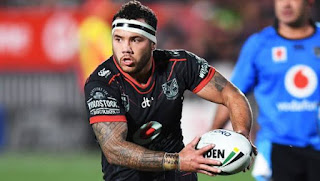 It was hard to pick out a Warrior to improve this week, but Jazz made a few silly errors including a dreadful mistake from the back of a scrum and ignoring a large overlap and trying to go himself unsuccessfully.

I like having Jazz in the Warriors 17, but I still feel he is better suited in smaller bursts instead of 60 or more minutes right in the middle of the game.

He is still young, and learning and I know he will have a strong game this week.

The first week of the finals has the Warriors heading to Sydney to face the Penrith Panthers.

I'm always wary of Penrith and this week is no exception, they have a good side and this year they are currently 1-1 in matches against the Warriors, beating the New Zealand 36-4 in round 17 and then losing 36-16 just last week.

The Warriors are not a team I would want to face in elimination football right now though as they currently have the best form in the competition winning four of their last five games.

They should welcome back Blake Green and James Gavet this week, and Simon Mannering and Roger Tuivasa-Sheck should be cleared to play this week after suffering injuries during the Raiders match.

A full strength Warriors side will be tough but the Panthers are coming into this match full of confidence after defeating the Storm in the final round, so this will be an exciting, tight contest.

I'm going to give it to the Warriors through and pick them to win by eight this week and to go into week two of the finals to face the loser of the Roosters vs Sharks encounter.

If you are in Sydney, make sure you get down to support the Warriors in this must-win game.

So that was my take on a scrappy Round 25, and as usual, I will leave you with some questions.

Who was your player of the game?

What is your confidence level for the Warriors playoff chances?

Which teams do you see making the Grand Final?

What is your score prediction for Finals Week one?
About author