After the embarrassment of Round 22, the Warriors headed back to Mount Smart Stadium for the second to last time in 2017 to face the Canberra Raiders.

In front of their smallest crowd of the year, the embarrassing Warriors run continued with their sixth loss in a row.

The Warriors were close to being the first to score with Solomone Kata unable to ground a grubber over the line.

He stayed down clutching his shoulder as the Raiders went the length of the field with Nick Cotric making easy work of the Warriors right edge defence to score.

Ten minutes later Cotric was at it again this time putting Jarrod Croker over the line.

The Warriors were next to score after throwing the ball around with David Fusitua finishing the play in the corner.

Only 6 points down the Warriors looked to be clawing their way back into the match until Issac Luke dropped the ball from dummy half, killing all momentum.

The Raiders yet again took advantage and scored for the third time with Blake Austin evading several tacklers to go into the break 18-6.

Both sides battled trade blows for the first 20minutes of the second half with neither side getting the upper hand until Roger Tuivasa-Sheck barged over to bring the Warriors back within reach.

Ken Maumalo dropped the ball on the next set to give the Raiders back the ball in good position, and Joseph Leilua proved hard to stop as he got the Raiders fourth try.

That was the straw that broke the camels back as the Raiders scored two more tries in the final stages of the game through Jordon Rapana and Nick Cotric.

The Warriors finished the match with a try in the last minute to Isaiah Papalii, but it was too little too late as the Raiders were the victors 36-16. 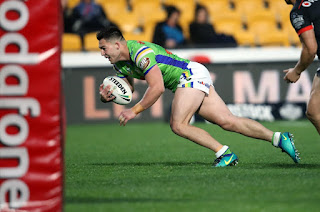 Copyright Photo: www.raiders.com.au​
I have no Warrior of the match this round, some of the younger players did show that they were trying, but the team as a whole was dreadful, and there wasn't enough from any individual to highlight but that Nick Cotric is a talent isn't he. 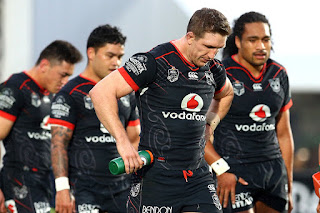 Copyright Photo: Renee McKay / www.photosport.nz​
My Warrior who needs to improve is going to the entire team.

Three games remain in the abomination of a season, and if the Knights and Tigers continue their current form, there is still a chance that the Warriors could wind up with their first ever wooden spoon.

I would like to say that after six losses in a row the Warriors will finally wake up but after listening to the Coach and players alike, they still have their heads in the sand and are well on their way to 7 losses in a row.

I don't know what is funnier, this excuse of a performance from the Warriors or the fact that the Warriors Officials faked the crowd numbers.

There definitely was not 10,000 fans in that Stadium on Sunday Afternoon I will be interested to see how many bother to show up for the last home game of the year in Round 25.

But back to the actual performance or lack thereof.

The Warriors had three repeat seats in a row camped on the Raiders try line and could not convert that territory and possession into points.

They just had no idea, it looked like there was no game plan and they continued to shoot themselves in the foot with unforced errors.

All but one of the Raiders tries came after a Warriors error, and with the way they have been performing as of late, they just cannot give the other teams easy opportunities.

The Edges were found out defensively yet again, and I'm sure that Rapana and Leilua were licking their lips all week knowing they had Kata and Maumalo opposite them.

This was the Warriors largest losing score margin in 2017, and I fear that there is more to come before the season is out.

With the way the Warriors have been performing, I didn't see a victory coming their way.

Foran comes back into the side with Mason Lino getting dropped, if it were me, I would have stuck with Mason and Ata in the halves and leave Foran in Sydney.

With Ben Matulino out with suspension, the forward pack has taken another hit and just cannot see them having enough to overcome the Rabbitohs at home, so I am picking a South Sydney win by 12.

Talks around the grounds of Eric Watson selling the club to Paul Davys seems to be gaining traction.

If the sale is confirmed it may be just what the Warriors need, a clean slate with a new set of eyes.

It creates so many questions, would he keep the coach? The players?

What changes could happen with a new owner?

Also if the buyout is rejected what changes will Eric Watson make in the organisation as it is clear that this club is failing.

So that was an abysmal Round 24, and per usual I will leave you with some questions.

What is your score prediction for the Rabbitohs match?

What do you think of Eric Watson potentially selling the Warriors?

Would you have dropped Mason Lino?

Do you think the Warriors will get another win this season?
About author