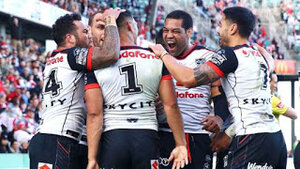 Wishing to put the horrible performance in Round 20 behind them, the Warriors travelled down to Wollongong to the fortress called WIN Stadium where the Dragons have yet to be defeated in 2018.

Not only have the Dragons not lost at WIN Stadium this year but the Warriors have never tasted victory at the ground either.

However, 2018 continues to be the Warriors year of breaking hoodoos as they came away with a hard-fought 18-12 victory.

What a way to bounce back after the disaster on the Gold Coast, being labelled soft by your coach isn't easy to swallow, and the Warriors needed to bounce back, and they did just that with this performance.

The performance wasn't perfect, and they were their own worst enemies at times, but they showed heart and an improved attitude that harkened back to the beginning of the season.

A big shout out needs to go to Shani and the Warriors team for organising a supporters bus for the Warriors members to travel to the game together.

It looked like a fantastic experience and only strengthened my desire to get Brad's Ramblings across the ditch for a game next season and meet the likes of Warrior Nation and Josh Gage in the flesh, might have to try and force my way into the next View from the East Stand road trip.

In a stark contrast from last week, I have quite a lot of positives and not so many negatives so I will start off with my positives from the match.

The Warriors took advantage of the Matt Duftys sin-binning scoring all their points in that ten minutes; this is a considerable improvement when you rewind back to Round 12 where the Rabbitohs scored against the Warriors with a man in the bin.

The Warriors goal line defence was a welcome return and was the difference between winning and losing this match, the Dragons were throwing everything they could at the Warriors in the last 30 minutes of the game, and they held them out.

The highlight for me being yet another Roger Tuivasa-Sheck try saver where he stripped the ball out of Tim Lafai's hands over the line.

The attitude of the Warriors improved drastically this round, when they started to make some errors and let the Dragons back into the game at the beginning of the second half, my heart sank as I thought it was going to be a repeat of the Titans game but the Warriors kept their heads up and came together.
With the finals looming this attitude and desire needs to be consistently present if the Warriors are to make waves in the finals.

And lastly, the Warriors reduced their error count only making six errors in the match.

Unfortunately, two of those errors lead to tries, but if the Warriors can keep their error tally in single digits, they will be well on track even more victories on the final stretch of the season.

As mentioned above this wasn't a flawless performance which leads me to my only negative of the match.

The Warriors need to reduce the penalty count, I think they were hard done by on a few calls, but in that second half they had six penalties called in a row, and if that happens again they could see a man in the bin or even worse see a victory slip away.

The Warriors have performed this best this year when they have towed that line so as long as they keep their defence strong, the Warriors can possibly afford a few extra penalties but the fewer chances they give the opposition with the ball the better it is for them.

I'm, sure there is more I could nitpick, but I feel like I still have a pair of rose-tinted glasses of as I can genuinely admit I did not expect the Warriors to come away with the win.

The Warriors record against the Dragons is poor, but it is fantastic to have in the record books that in 2018 the Warriors ended the Dragons win streak and also handed them their first defeat at WIN Stadium.

Copyright Photo: Photosport​
My Warriors of the match goes to Roger Tuivasa-Sheck.

As I said last week when I pick Roger as my Warrior to improve I believed it was a blip and that he would bounce back and boy did he ever.

To say Roger had a strong game is an understatement, he ran hard and fast, creating chances for the Warriors backline to score and did not shirk his defensive responsibilities.

Roger exemplifies the attitude the Warriors showed this week; you can see that he is giving it 100% for the entire 80 and that has to rub off on the rest of the team.

If the rest of the side can match Roger's commitment for the remainder of the season, I feel like they could have a decent chance in upsetting some of the playoff favourites. 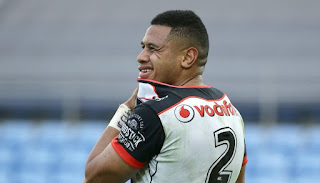 This was hard as I think the majority of the side had a good performance, but unfortunately for David, he made three errors in the second half, three doesn't sound like much, but when the Warriors only made six mistakes, it makes three errors a bigger deal.

It didn't help that 2 of his errors lead to the Dragons only tries in the match.

Much like Roger last week, David's performance this week was an anomaly, and I firmly believe that David will bounce back this week.

In round 22 the Warriors return to Mount Smart to face the Newcastle Knights, with three of the last four games of the season being played at home the Warriors need to turn around their poor form at home.

Its hard to believe that the Warriors have only won 4 games at home this season when they just notched up their 8th away victory for the year.

If the Warriors can win the rest of their home games, they may still have a legitimate chance of making the top four again.

The Knights have been a bit up and down the past few rounds and im picking the Warriors to get the win by 10 here.

The Warriors are going to need to shut down Kalyn Ponga plain and simple, and if they play like they did in Wollongong, then they have a great chance of getting the win here.

So that was my take on a fantastic Round 21, and as usual, I will leave you with some questions.

What was your biggest positive from this performance?

Who was your player to improve?

How many wins do you see the Warriors getting in the last 4 Rounds?

What is your score prediction for Round 22?
About author