After last weeks tight encounter against the Storm the Warriors made their way to the Gold Coast to face the Titans.

The Warriors have enjoyed a rich vein of form against the Titans, winning the past six matches between the two and a comprehensive victory for the New Zealand side was expected by most fans and pundits alike.

The Titans didn't read the form guide however and put the Warriors to the sword with a resounding 36-12 defeat.

Well, I think Stephen Kearney described the Warriors performance in this match best when he labelled the Warriors soft after they fell to pieces in the second half.

The first half performance was more composed than last week most likely due to the return of Blake Green but then that second half came, and the Warriors were truly awful, lacking cohesion and making silly errors on both attack and defence.

I'm not sure what happened in the sheds at halftime, but whatever it was the Warriors need to steer clear of it for the remainder of the season.

Perhaps the Warriors like myself took this game lightly and suffered the consequences of taking their eyes off the prize.

Hopefully, it is the kick in the pants the Warriors need on the final stretch of the 2018 season.

There isn't much to praise, but I do have a select few highlights which leads me to my positives of the match.

The Warriors should welcome back Tohu Harris, Issac Luke and Adam Blair to the game day 17 for this weeks clash against the Dragons.

This is a must-win game for the Warriors, and the Dragons are going to be a challenge but having those three experienced players back will give the Warriors a fighting chance.

My last positive is the young guns Isaiah Papali'i and Joseph Vuna.

In a game where the majority of the side underperformed these two played well beyond their years, it's hard to believe that they are as young as they are.

Papali'i has a bright future and will be a mainstay for the Warriors for years to come as long as his body holds up to the weekly grind of the NRL.

Vuna has impressed me over the past few weeks and while he still has a lot to learn he has time and size on his side.

With the injured players returning I think he has done enough to hold onto a bench spot with Chris Satae and Sam Lisone being the most likely to be dropped back into reserve grade.

That is all I can pick out as positives which brings me to my negatives.

Kearney still appears to be clueless when it comes to his interchange rotation; he had Jazz Tevaga out on the field too long again, instead of moving him into the middle forward role when Karl Lawton came on he should have taken him off for a rest.

In weeks past you could argue that he needed Jazz out there for long periods but Jazz moving into the forward role in this game just meant reduced minutes for Simon Mannering.

Paasi and Gavet also played limited minutes (albeit Gavet's minutes took a hit due to his injury from the crusher tackle).

I feel like a broken record, but Paasi needs at least 60 minutes of game time each week, I would have him start the first 30 minutes and then return for the final 30.

Paasi is excellent at eating those metres and adds defensive pressure in the middle of the field, and that is too much of an edge for the Warriors to leave on the sidelines.

The Warriors attack was one dimensional, and the Titans were able to shut them down at ease.

To be honest, if Warriors want to be one dimensional, they could have at least just kicked to David Fusitua in the corner, but they didn't even do that.

I think the primary issue was the loss of Issac Luke, he is the glue that keeps this team together, and without him, the Warriors lost the edge they would have had in the ruck area.

With him back this week I think the Warriors will once again be on the same page attack wise.

Lastly, the Warriors as Kearney put it were soft, the Warriors fell apart at the seams in that second half, and it was all down to attitude.

They fell off tackles and did not keep their defensive line in check finding themselves in a two on one situation far too often.

It was an embarrassing performance to witness against a side they should have blown off the park.

I'm confident that the Warriors will do some soul searching this week and will put on a better performance in Round 21 and against the Dragons they are going to need it. 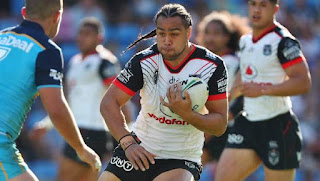 Copyright Photo: www.stuff.co.nz​
My Warrior of the game goes to Leivaha Pulu.

Pulu was a key performer at the start of the Season, and the Warriors got the wobbles when he got injured, and in his first game back he showed no signs of ring rust putting on a solid performance where many around him faltered.

He ran strong and offered the Warriors second phase opportunities, defensively he started to slip towards the end of the game with match fitness possibly being an issue, but he will be integral to the Warriors push to return to the playoffs.

I expect him to be starting this week and continuing his fine form. 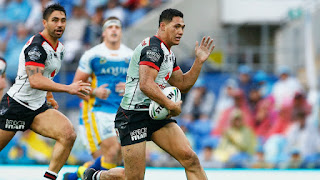 Copyright Photo: www.nrl.com​
My Warrior who needs to improve goes to Roger Tuivasa-Sheck.

I almost could have put the majority of the side in this category this week, but Roger had a day to forget on the Gold Coast.

The Titans heaped the pressure on Roger, and he usually is able to rise above it, but it just wasn't to be in this match.

As the points piled on Roger appeared to get worse, making errors out the back that he usually never would make.

It is a blip on the radar for Roger, and he will bounce back this week, players of his calibre rarely underperform in back to back games, so I expect a strong showing from him this week.

Round 21 has the Warriors heading to WIN Stadium to face the St George Illawarra Dragons in what is going to be a tough task.

The Warriors seldom walk away from WIN Stadium with a victory, but they desperately need the two points this week to keep themselves in contention for the playoffs.

To beat the Dragons, the Warriors are going to need a massive performance from the forward pack, and the whole side needs to front defensively to stop the Dragons getting a roll on.

As cliche as it is, this game will be decided by whichever teams forwards get the edge, both sides have lethal threats in the backline, but you have to do the work up front before you can cash in out wide.

I'm picking the Dragons to win by 12 here, I think they will be too strong for the Warriors, but hopefully, my prediction is wrong once again.

The View from the East Stand Podcast crew are making the trip across the ditch for this match so have a listen to their episode this week to hear their plans for the weekend if you are in Sydney and want to meet up and say hi.

So that was my take on an awful Round 20, and as usual, I will leave you with some questions.

Do you think Kearney has an issue with the interchange rotation?

What players would you drop for the returning Luke, Harris and Blair?

Who was your Warrior to improve from Round 21?

What is your score prediction for Round 21?
About author