NZ Warriors Round 17 Review: Night to forget in Penrith

After last weeks controversial narrow loss to the Sharks the Warriors crossed the Tasman looking for retribution against a Panthers side minus their origin stars.

A win here would see the Warriors return to the top four but it was a night to forget for Warriors and Warriors fans alike as the Warriors delivered arguably their worst performance of the season losing 36-4.

Well, what can you say about that performance?

The Warriors were dreadful on Friday night, this was their chance to make a statement against an understrength side, and they were well and truly humbled.

I'm not sure if it was a case of not preparing correctly or if they took the Panthers lightly, but it was both frustrating and embarrassing to watch.

Nothing seemed to work for the Warriors in this match, and the backlash from the result stirred the murmurs that the Warriors of 2017 had returned.

Now I don't believe this to be the case, yes the match was ugly, but the glaring issues can be fixed, and luckily there is a six-point gap between the top eight and bottom eight, so the Warriors still have a buffer to keep them in the top eight.

However, if they don't fix those issues (more on that in my negatives), they could very well slide out of the playoff race or get eliminated in the first week.

The only positive I have this week and that the match is over and the Warriors have the chance to get back in the Winners circle this week.

Unlike my lack of positives, there were several issues which leads me to my negatives.

I feel like a broken record, but missed tackles and penalties continue to derail the Warriors week in and week out, and the Warriors missed 62 tackles against the Panthers.

There is no excuse for 62 missed tackles, and I'm not sure what the Warriors need to do (bar one change which I will go over in my Warrior to improve) to fix this, but they have to do something.

The Warriors need to reduce their penalty count, in the first half the Warriors were penalised six times in a row and were starved of possession as a result.

You cant win games if you give the opposition the ball, and with ten errors and ten penalties that is 20 sets gifted to the Panthers that should not have happened.

When the Warriors did manage to hold onto the ball, they never seemed on the same page, and it showed with forward passes and poor last tackle options.

Shaun Johnson had a quiet game, and the forwards did not do him any favours with the majority of the pack not doing their part in bending the defensive line.

The loss of Bunty Afoa and Tohu Harris was noticeable, and James Gavet, Chris Satae and Ligi Sao need to step up to the plate because Agnatius Paasi cannot do it all on his own.

This leads me to my last point, Stephen Kearney's interchange rotation.

Paasi came off in the twentieth minute and was not brought back on until the final eighteen minutes.

Paasi is head and shoulders above the rest of the front rowers right now, and you could see the Warriors lost a step when he left the field, and it felt like he was forgotten on the sidelines.

Being down 12-0 at the half I would have started the second half with Paasi to really get them back into the match.

Hopefully, the interchange rotation gets fixed, but I'm doubtful as Kearney has always left me scratching my head with his bench choices and subsequent gameday rotation.

​
I have no Warrior of the match this week.

There were a few players that were trying, Roger Tuivasa-Sheck, Blake Green, Passi, Issac Luke, David Fusitua and Ken Maumalo all played well in a weak side, but the overall performance of the team tarnished all the individual performances for me. 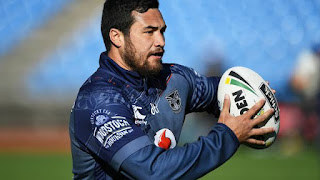 I feel like Peta has been in this section every week and it is always for the same reason, he seems to lack the ability to tackle.

Gerard Beale replaced him in the last 14 minutes, and the Warriors defence improved dramatically almost instantly, and with Beale injury free it feels like a no-brainer to have him start and to relegate Peta to the reserve grade.

I have been of the opinion that Peta would improve as the season progressed and that his combination with Fusitu'a on attack outweighed his defensive frailties, but the final nail in the coffin for me was when he gave up chasing the Panthers players down after a line break in the lead up to Waqa Blake scoring.

Watching the replays after the try was scored you could see that Peta showed no interest in trying to catch the Panthers players and it concerned me to see such a blatant lack of heart.

If Peta is named this week to face the Broncos, I couldn't even begin to imagine how bad a performance he would have to put forth to get dropped.

The business end of the season is upon the Warriors, and they have some tough matchups in the next three rounds with games against the Broncos, Storm and the Dragons, and they can no longer carry players that are not pulling their weight, so he needs to be dropped.

Round 18 has the Warriors facing the Bronco's in Brisbane on Sunday afternoon.

It's a must-win match for both sides, and I'm picking the Broncos's to get the win by 18.

I'm hopeful that the Warriors will get the win here but I think the Forwards will not be able to match the Broncos pack and the backline will struggle as a result.

The Warriors are hosting a members screening of the game at SkyCity on Sunday that I will be heading along to, so if any of you are going, come and say hi and let me know what you think of the Season so far.

I've heard good things about these events in the past, so I'm looking forward to going and watching the game on a big screen and hopefully watching a great game.

So that was my take on an embarrassing Round 17, and as usual, I will leave you with some questions.

Did you have a player of the game?

What would you do with Peta Hiku?

What is your score prediction for Round 18?
About author