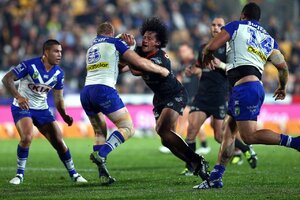 After the bye in Round 15, the Warriors returned to Mount Smart to face the Canterbury Bulldogs needing a win to keep their playoff aspirations alive.

The Warriors have turned Mount Smart into a fortress in 2017 suffering only one loss to the table-topping Melbourne Storm and this round was no exception with the Warriors winning 21-14.

It wasn’t a pretty performance from the Warriors but it was hard fought, both sides were desperately seeking a win and it showed.

The Warriors had a few hiccups early in the match perhaps due to Shaun Johnson taking the lead in Kieran Foran’s absence but they turned in a clinical performance completing 82% of their sets.

Once Shaun and Ata started to gel the team started to threaten the Bulldogs line, defensively they showed a tough determined edge that has been lacking for most of the season.

They Warriors only scored three tries this week but the first try to Ken Maumalo deserves a special mention, after an ankle tap he had the presence to get himself back up and showed both pace and strength to get the long distance try, I have been calling him Mini Manu all year but this was a try that was reminiscent of Manu from a few seasons ago, if Ken keeps performing the way he has for the past month it is fair to say that he has taken that wing spot from Manu for good.

James Gavet’s return was welcomed and he added serious starch to the forward pack and his stiff defence lead to the Bulldogs losing their heads and ultimately Josh Jackson for 10 minutes.

But with James return we also saw the exit of Issac Luke with a dislocated shoulder; Nathaniel Roache took the opportunity of more minutes in his stride and put in a great performance.

The close score was not reflective of the dominance the Warriors had on the field, three additional tries could have been scored but were denied by the bunker, I think at least two of those should have been given but thankfully for the Warriors, they didn’t have to rely on the bunker to win this match.

By the time Shaun slotted a field goal the game was well and truly over and the 21-14 win brings them only two points away from the top 8. 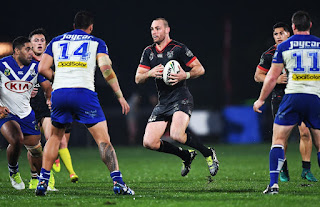 Copyright Photo: Andrew Cornaga / www.photosport.nz​
My Warrior of the game was tough this week with great performances from several players but I am giving it to Simon Mannering.

Simon gets ignore every round by me when it comes to my Warriors of the game simply because I have grown used to his great performances.

But I couldn’t ignore him after this performance, 60 tackles is impressive but Simon also ran for 155 metres and didn’t miss a single tackle.

Simon leaves everything out on that field and I’m hoping that this attitude of his is filtering throughout the rest of this team and rubbing off on all the young players in this squad.

Copyright Photo: http://commentaryboxsports.com​
My Warrior who needs to improve goes to Charnze Nicoll-Klokstad, a bit of a hard choice as all of the team had a generally good performance but Charnze made a few unforced errors and didn’t have the best day.

It is early days in Charnze Nicoll-Klokstad’s career and after playing quite well since his debut it was only a matter of time for his form to take a dip, confidence is the key and he will have plenty of chances to regain it when the Warriors play Manly this weekend.

The Warriors are taking full advantage of the State of Origin period yet again but now have to travel to Perth to face the Manly Sea Eagles; the Sea Eagles have been performing well for the past month and will be a tough match.

Throw in the fact that they are playing in Perth where the Warriors have never won and it looks to be a tough night out for the Warriors.

The Warriors have named Kieran Foran to return at five-eighth and Nathaniel Roache to start at hooker with Issac Luke not fit to return from his shoulder injury.

This likely means that Ata Hingano will take a bench spot with Albert Vete, James Gavet and Bunty Afoa to fill in the other spots with Sam Lisone being ruled out with a family engagement.

If the Warriors are going to have any chance in this match they just need to do all they basics efficiently.

The Forwards have really started to perform the past few weeks so they need to continue running in groups and bullying the opposition.

The loss of Issac isn’t ideal but the Warriors just have to front up in his absence, Roache is a talent and very dangerous out of dummy half so I expect to see some damaging runs from him.

With the Warriors having another bye after this match they can truly throw everything they have and then some this week and get the win, unfortunately, I can’t shake the Perth factor and I’m going with a Sea Eagles win by 10.

So that was satisfying Round 16 and as per usual, I will leave you with some questions.

Do you think the Warriors were hard done by with some of the Bunkers no try decisions?

Are the Warriors starting to find form or is this just the usual origin run they always have?

Has Ken Maumalo done enough to lock in the wing spot for the foreseeable future?

What is your score prediction for the match against Manly?
About author