NZ Warriors Round 14 Review: Warriors front up in Hoffman Milestone Well, the Warriors have one less Monkey on their back after their Round 14 trip to the Gold Coast.

The Warriors who have yet to taste victory away from Mt Smart in 2017 really needed to get the job done against the Titans and in Ryan Hoffman’s 300th NRL match the Warriors delivered with a 34-12 win.

It wasn’t a perfect game by any means but the Warriors played with more desire than we have seen for quite a few rounds, the Titans may have scored first but the Warriors dominated the first half scoring four tries to one.

The Warriors pressured the Titans defensive line repeatedly with the Titans having trouble containing the Warriors front rowers and large wingers.

Ken Maumalo had another impressive showing, his confidence is growing and his performances are improving as a result and hopefully, there is still more to come from the youngster.

The injection of Sam Lisone and Albert Vete from the bench helped the Warriors keep the Titans on the ropes and with the exception of the first 10 minutes the Titans were never in this game.

The Warriors brought the offload out again and showed that when given license to throw the ball around they really put teams to the sword.

Defensively the Warriors upped their performance also, reducing their missed tackles to 21. A number they still need to improve but it seems to be on the mend.
Putting it simply the Warriors ran with purpose on attack, reduced their errors and tackled with intent and if they perform in that mindset they are a hard team to get past. 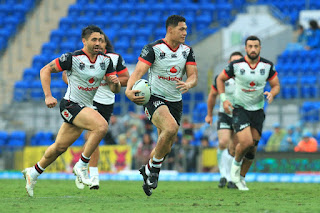 Roger has been disappointing for the past few rounds but he delivered in this match, his ability to get the Warriors out of their own red zone on kick returns is a key component of this side's chances for victory each and every game.

His ability to break the line has been sorely missing but he appears to be coming back into form and with the season on a knife edge the Warriors need his form now more than ever. 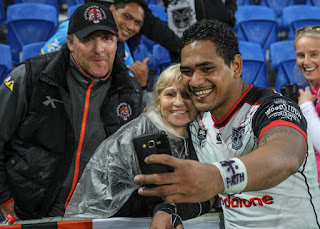 Defensively he is still a liability but what he offers on attack has normally been enough to counter his weaknesses, this year however offensively he has been a mere shadow of himself.

Opposition teams have figured him out and his barnstorming runs have become a thing of the past.

He has loyalty from Kearney right now but if his current form continues to slide he will need to go find his confidence in the lower grades.

It was great to see the team put on a good performance in Ryan Hoffman's 300th game, the joy and unity the team showed after Ryan slotted the last conversion of the match was the first time in months that these players actually looked like a team.

This was an enjoyable game to watch and it couldn’t have come at a better time, interest in the Warriors seems to be at a level of indifference right now and the only way the Warriors can get people interested again is by winning.

This game isn't a miracle cure for the season as the Warriors still have a long way to go but if they can start winning on the road it will make things a lot easier.

Stephen Kearney made the bold call to stick with his players that haven't been performing and this week it paid off with the win but I'm still not convinced that he knows what he is doing but I am willing to give him the benefit of the doubt.

I have been critical of Stephen Kearney's interchange selections and he had me scratching my head again with Ata Hingano being named to join the forwards on the pine.

This ended up working in the Warriors favour when Kieran Foran went off with a quad injury and Ata slotted in well and showed his pace running onto a nice ball from Shaun Johnson to score the first but definitely not his last NRL try.

The question is how would Ata have been used if Foran didn't get injured?

My guess is that it would have been another game where a player sat on the bench for the entire game, which Kearney needs to stop doing.

Kieran Foran's injury doesn’t look that serious and thankfully the Warriors first bye round is happening this week so he has more time to recover.


After this bye round the Warriors are back to Mount Smart for Friday Night Football against the Canterbury-Bankstown Bulldogs.

It goes without saying but the Warriors need another victory here and I think they can do it if they bring the mindset they brought for this match so I'm picking the Warriors to win by 12.

So that was a more optimistic round 14 and as per usual, I will leave you with some questions.

Do you think Foran will be ready for the Bulldogs?

Is there still a chance of playoff football for the Warriors?

What are your thoughts on Ata Hingano?

What would you do with Solomona Kata?
About author