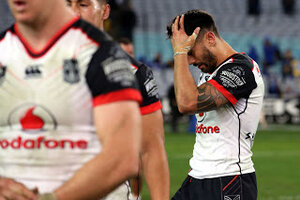 The Warriors travelled back across the ditch to ANZ Stadium to face the Parramatta Eels.

Confidence was up again after last rounds victory over the Broncos and the Warriors were looking at getting their first win on Australian soil in 2017.

However it was not to be as the Parramatta Eels toughed it out through multiple injuries and kept the Warriors on the search for that first win away from Mt Smart in 2017.

The Eels didn't long to stamp their mark on this match with tries to Kirisome Auva’a and Josh Hoffman in the first 10 minutes.

The Warriors clawed their way back into the game with tries to Simon Mannering and Ken Maumalo in the 19th and 26th minutes.

Shaun Johnson made an error on the last tackle moments later which resulted in a try to Semi Radradra at the other end of the field, making the score 18-12 at the break.

It took 16 minutes but the Eels were over first in the second half with a try to Tepai Moeroa.

The Eels were losing players and by the 60th-minute mark were down to a one man bench when the Warriors took advantage of the tiring pack with a try to Ryan Hoffman.

Roger Tuivasa-Sheck scored in the 71st minute to close the gap to two points before Clinton Gutherson scored in the dying stages of the match to break Warriors fans hearts with a 32-24 loss. 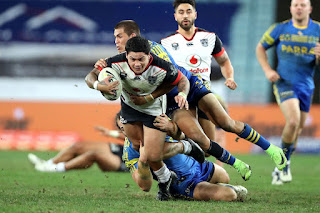 Issac Luke had one of better performances in this match, with James Gavet and Ben Matulino bending the defensive line Issac was able to take advantage with lots of runs out of dummy half.

With the Eels defence getting tired due to the mounting injuries Issac was having a field day average almost 13 metres for each run he made.

Defensively he was sound also with 33 tackles and only 1 missed in the match.

If the rest of the team played at the level that Issac played in this match, well then they wouldn't be in the dire situation that they're currently in. 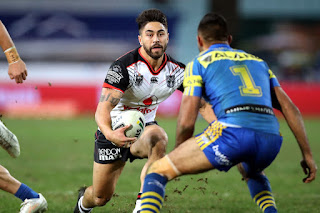 Last week when the critics were calling Shaun out, he addressed the criticism and vowed to be better and in fairness to him against the Broncos he showed glimpses of the Shaun Johnson we all like to watch.

That Shaun vanished this week and the bumbling Shaun returned complete with the poor last tackle options.

His kicking game was dreadful and he appeared lost throughout the game.

With Kieran Foran leaving and no experienced halves signed as of writing, the Warriors need Shaun to step up and start earning the money they are paying him.

I've defended him in the past as the forwards were not giving him a platform to run off but in this match 5 of the 6 starting forwards all ran for more than 100 metres so that excuse has worn thin.

This match was hard to stomach in all honesty.

The Eels were the walking wounded and the Warriors should have crushed them when they were down to a reduced bench but the Warriors just couldn't get the job done.

Kearney appears to be out of his element, changes need to be made with this side with their season hanging by a thread and yet he continues to stay the course with players that need to be dropped.

Solomona Kata, Bodene Thompson, Jacob Lillyman would all be gone if I was in charge with Ryan Hoffman close to joining them.

Worse case scenario is that they perform as bad as the players they are replacing and the Warriors are still no better but at least it would show that the coaching staff are trying to fix the problems.

As of writing the team has been announced for this week's upcoming match and Kearney has stuck with the same side yet again bar James Gavet who is out with a hamstring injury.

Stephen Kearney sir I am feeling deja-vu from your days in Parramatta where the team was falling apart and you offered no opinions of your own on how to fix it.

If you as a coach cannot stand up on your own two feet and make some decisions, how can you expect your players to show some grit and passion?

Heart and desire are seriously lacking in this side and this has been a problem for the past few years, Some of the players have hit out and the media and fans being too critical of them and in honesty they need to harden up, fans and media will never stop freely giving their opinion and the only way to stop it is to perform.

Change is needed now in both attitude and personnel, 6 embarrassing years in a row is not good enough!

The Warriors head to the Gold Coast to face the Titans, with the recent news of James Gavet being ruled out I am struggling to see a positive result for the Warriors.

Still, without a win in Australia the Warriors need to come away with the two points here but with the current side I don't see them getting it done so I am picking the Titans to get the win at home here by 10.

So that was a demoralising round 13 result and as per usual, I will leave you with some questions.

What should or could Kearney do to turn this season around?

Would you bring some of the young guns into the side, if so who?

Where do you see the Warriors finishing in 2017?
About author