After back to back to back disappointing showings, the Warriors made their way back to Mt Smart to face the Brisbane Broncos.

With State of Origin season upon us, the Broncos made the trip across the ditch missing 7 players from their squad but still had the likes of Ben Hunt, Jordan Kahu, Adam Blair and Benji Marshall to rely on.

As Warriors fans have come to expect at this time of year, the Warriors took advantage of the Origin time period and got the much needed two points.

The Warriors continued their trend of starting games strong and were first to strike at the 10-minute mark when Blake Ayshford scored off a Shaun Johnson short ball.

10 minutes later Charnze Nicoll-Klokstad ran a kick return back 40-50 metres which lead to Shaun Johnson evading three defenders and scoring under the posts.

The Warriors and Broncos traded blows for the remainder of the first half and after Charnze Nicoll-Klokstad dropped the ball over the line, the Warriors fired one final shot with Roger Tuivasa-Sheck scoring off a Shaun Johnson grubber taking the Warriors into the break 16-0 ahead.

The Warriors struck early in the second half with Ken Maumalo scoring at the 42nd-minute mark.

The Bronco's attempted to scare the Warriors fans as they scored two tries back to back through James Roberts, with flashbacks of the Panthers games 2nd half collapse fresh in everyone's minds, the Warriors needed to step up and close the game out, this happened when my current Warrior of the year James Gavet sealed the win with a try in the 66th minute giving the Warriors the much needed two points and a 28-10 win. 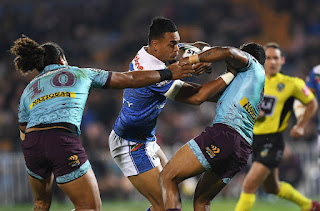 Ken is a player that polarises fans opinions, he still has a lot of weaknesses that he needs to work on but in this match, he showed what he can offer when playing in the right mindset.

Ken was a headache for the Broncos all night, his strong runs out of his own half pressured the Broncos defensive line and helped the Forwards set up the platform Shaun Johnson and the rest of the backs needed.

Perhaps the possible near return of Manu Vatuvei and the impressive early promise that Charnze Nicoll-Klokstad has shown have made Ken pull up his bootstraps and improve his performance and if he can keep playing at the level he played on Saturday night I will be more than happy to keep him on the wing in the foreseeable future.

My Warrior who needs to improve doesn't go to a player this week but actually goes to Stephen Kearney's interchange plan.

A lot has been said of Kearney having Nathaniel Roache sitting on the pine and refusing to use him, but this round we saw Bunty Afoa only being used for the final 10 minutes of the match.

If you only plan on using a player for 10 minutes I would be using the likes of Charlie Gubb who excels when used in limited minutes.

The Warriors got the victory here but I, still not ready to trust Kearney's process just yet.

So the Warriors are finally back in the winner's circle.

A Warriors win here gets met with the "Baby Broncos" excuse and a loss to a team missing these Origin players would be a disaster for the Warriors already dim playoff hopes.

The Warrior don't arrange the NRL Draw and the fact that it works in their favour when the State of Origin comes around is not their fault.

The NRL does need to work out a way to incorporate State of origin into the NRL season in a way where it doesn't effect teams in a negative way but until they do the Warriors need to take advantage.

However, the Warriors need to ride their Origin form into the post Origin time.

Every year we watch the Warriors get results and find form in this period only to fall apart after Origin ends and all players return.

The Warriors need to get post origin wins on the board and I believe this squad has potential as long as the basics are refined.

The Forward pack finally came to the party in this match, running with purpose and keeping the Broncos defensive line on the back-foot, this gave Shaun Johnson the opportunity to attack the line in the way only he can and he had a field day and the Warriors reaped the benefits.

The forwards need to do this week in and week out if the Warriors want any chance of playoff football.

The Warriors wound back the clock in the spirit of their heritage round jersey and rediscovered the offload making 12 offloads in this match, throw in 5 line breaks and only 6 errors and the Warriors showed that they still have the old Warriors style in there they just need the confidence to use it.

The defence improved a great deal compared to the last two rounds but still has a long way to go if the Warriors are to be taken seriously in 2017.

The Warriors still cannot defend against the offload and the Broncos in fact only scored because of their ability to offload.

If the Warriors can tighten this up it will go a long way to securing victories for this side.

This week the Warriors travel to ANZ Stadium to face the Parramatta Eels, the Warriors need to get the win here to close the gap on the top eight teams.

Only one change has been made to the side that faced the Broncos with Solomona Kata returning to the centres with David Fusitua pushing out to the wing and Charnze Nicoll-Klokstad going back to the reserve grades.

With Charnze's recent performances Solomona will need to get back into his 2016 form this week or he may find himself out of the team again.

This is going to be a tough tight game but I'm picking the Warriors to win this match by 10.

So that was Round 12, An enjoyable to watch victory with glimpses of promise, and as per usual, I will leave you with some of those questions.

Do you think the Warriors have turned a corner after this win?

Do you think Ken Maumalo's performance was a sign of him growing into a first grader or a one-off performance?

Would you have brought Kata back into the side for CNK?

What is your score prediction for the Eel's match?
Reactions: Centurion
About author