After a disappointing Round 10 performance the Warriors once again made the journey to Sydney, this time to face the bottom of the table Parramatta Eels.

The Warriors were buoyed by the return of Issac Luke but lost Roger Tuivasa-Sheck who stayed in New Zealand on baby watch; this saw a reshuffle with Peta Hiku moving to fullback and Gerard Beale making his Warriors debut at right centre.

With several teams nipping at their heels the Warriors needed the win here, and they walked away with the two points with a tough fought 24-14 victory.

It definitely wasn't pretty, but the Warriors showed grit and determination after the Eels looked to be on their way to a win.

Losing Roger before the match was a significant loss but I think moving Peta Hiku to fullback and bring Beale in was the right call.

Hiku has some experience at Fullback and has been playing first grade all season, so there was as little distraction as possible to the lineup which was sorely needed with Shaun Johnson still out.

Bringing Beale in with his extensive experience helped tremendously as well, and I think he performed well in only his second game back from a broken leg.

The Warriors were able to exhort a lot of pressure on the tiring Eels side which forced much-needed errors that allowed the Warriors to get themselves back into the match which leads me to my positives from the game.

The Warriors showed heart in this match, with a man down in the bin the Warriors managed to only leak one try in that ten minute period, the Warriors do seem to lift when they are a man down.

I only hope they start bringing that level of intensity to their games for the entire 80 minutes.

The forwards started their road to redemption after last weeks performance and gave the Warriors the go forward they needed to unleash their backs.

They still have a way to go as some of the forwards are still not playing at the level required as they near the middle of the season, but I'm confident that they will get there.

I also want to praise Hiku and Beale, the last minute change to the lineup could have been a nightmare, but I think they both performed well in this match, Hiku was threatening on attack and did well defensively.

I still hope Roger is back this week, but Hiku did enough to show that he can fill in if needed (much like Mason Lino is doing in the halves right now).

Beale looked like he hasn't missed a step since his injury and even after only playing two matches he must already be in contention for taking a centre spot over from Hiku or Kata.

Stephen Kearney will have a few selection headaches in the upcoming rounds, but I'm glad as it shows some depth which is needed with injuries always being a constant threat in NRL.

As stated above this game was an ugly win which leads me to my negatives from the match.

Penalties are still a huge concern for me and with the Warriors getting yet another sin bin and they really need to be careful; the Warriors have been getting a lot of success in 2018 when they are tiptoeing on that infringement line, they just need to reign it back a little.

The Warriors edges have started to rush in again which is a concern with some strong sides coming up in the next few rounds which will no doubt target this in their game day strategy (another possible reason to bring Beale in for Hiku to strengthen the defensive on the right edge).

The Errors need to reduce, nine unforced errors are far too many, and the top echelon sides will punish this side if they continue to make simple mistakes. 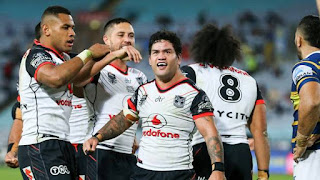 Copyright Photo: www.nzherald.co.nz​
My Warrior of the game goes to Issac Luke.

As I said last week, Issac is the glue in this side, and you could see the lift the Warriors got with his return.

The Forwards seemed to be more direct and with Issac leading them from the front like he has been doing all season and he adds much-needed starch to the middle of the defensive line.

He is a constant threat out of dummy half and this continued with another good try after a strong scoot from the ruck area.

I would say Issac in the top three or four hookers so far this season and im hopeful that his form will continue through to the playoffs.

He is in the last year of his contract, and I would find it hard to believe that the Warriors will not be chasing his signature for a few more seasons. 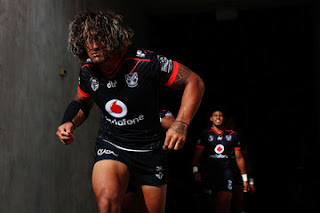 Copyright Photo: warriors.kiwi​
My Warrior to improve this round goes to James Gavet.

Full disclosure James is my favourite Warrior in the current squad, and I thought he started the season strong, but something has been missing since his return from injury a few rounds ago.

I'm not sure if his fitness took a hit with the time out of first grade, but he isn't running the ball with the impact he used too.

The Warriors need him back to his old form sooner rather than later as the Warriors will be hard to stop if James, Bunty, and Agnatius are all running with intent.

Round 12 has the Warriors return home to Mt Smart to face the South Sydney Rabbitohs for the second time this season.

The Rabbitohs have been strong this year and im sure they will be looking to avenge their Round One defeat to the Warriors in Perth.

The Rabbitohs forwards have returned to their physically dominating ways, and the Warriors are going to need to front to ensure they do not have a repeat of there last home game performance.

The Warriors have a bye in round 13, so they have no excuses to not leave it all out on the field this week, and hopefully, they will welcome Shaun Johnson and Roger Tuivasa-Sheck back into the side.

For only the second time this season, I was able to correctly predict the margin last week, so fingers crossed I can make it two in a row with my prediction this week.

Im picking the Warriors to get the win here by 8 points.

So that was my take on a good Round 11 performance, and as usual, I will leave you with some questions.

What would you be doing with Gerard Beale?

Who do you think needs to improve the most?

Would you re-sign Issac Luke for further seasons?

What is your score prediction for Round 12?
About author