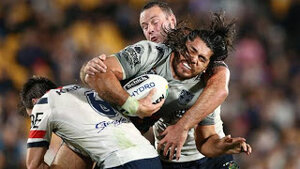 After their impressive Round nine victory the Warriors hosted the Sydney Roosters in the first ever Indigenous round game played in New Zealand.

After defeating the Roosters emphatically in Round four, many (myself included) predicted another win for the home side but the Roosters had other plans as they dominated the Warriors in a one-sided affair handing the locals a 32-0 drubbing.

What a disappointing game, losing is bad but to not score a single point is dreadful which is probably the only way I can describe this match.

The Rooster's had something to prove with many critics pointing fingers at a lacklustre Roosters pack, and they delivered.

The Warriors forwards could not get the upper hand at any stage throughout the match which in turn restricted the impact that the Warriors outside backs and on the game.

To make matters worse whenever the Warriors did get hold of the ball they lost it early in tackle count which just negated any momentum that the Warriors tried to build.

At halftime, the Warriors were only down 14-0 and could have quickly forced their way back into the match with a refreshed performance in the second half, but they just delivered more of the same.

The matchup was always going to be hard with the Warriors missing Shaun Johnson and Issac Luke, but in my opinion, Issac Luke is the key.

It's no coincidence that in the Warriors two worse performances this season Issac only played limited minutes in one and did not play in the other.

Issac is like the glue to this side and is sorely needed, which leads to my positives from the match.

Issac should be cleared to return this week.

The Warriors are still in the top four, but the competition is close this year, and there are a lot of teams nipping at the Warriors heels right now, so the Warriors really need to add more wins and improve their points differential.

Those are my only positives for Round 10, so I will just get into my negatives.

With the forwards clearly struggling I do not understand why Stephen Kearney did not bring James Gavet into the match until 10 minutes into the second half.

James brings mongrel and grunt but by the time he got out there the battle was already over.

The whole interchange rotation in this round was puzzling to me, to be honest, they took Karl Lawton of reasonably early and kept Jazz Tevaga out there for too long when it was evident that he needed a spell on the bench.

The defensive line was lazy, and there were too many times when some of the defenders had their backs to the Roosters by the time the Roosters were already running at them.

The Warriors defensive liabilities have been apparent all season, and the Roosters just played a simple gameplan and made the Warriors looked silly.

The handling errors were inexcusable, 16 in total and there was at least three that occurred on the first carry of a set when you are under the pump and need to claw your way back into the game you cannot just give the opposition the ball back so easily.

The Warriors were disjointed and lacked the cohesion that has made them dangerous in the early stages of the season, and if they want to make a serious run in the playoffs, they need to come together once again and start showing some consistency.

The last ten minutes of the game reminded me of the old Warriors sides that seemed more interested in getting into fights than winning the match, the old " we cant win the match, but we will win the fight" mentality.

The Warriors weren't entirely to blame for this as Dylan Napa and Jared Warea-Hargreaves definitely needling the Warriors (on that note who is Napa sleeping with to get the rub of the green with his defensive slip-ups, he seems to get away with a lot of no arm tackles every year).

My biggest concern right now is that the other sides have figured the Warriors out and this could lead to a slide for the New Zealand side if the Warriors do not increase the physical intensity and the forwards don't prepare for a battle every week then it could be a rough time for Warriors fans.

​
I don't have a Warrior of the game for Round 10, Roger Tuivasa-Sheck was trying out there, but I just couldn't select a "best performer" after that performance so I will leave it at that. 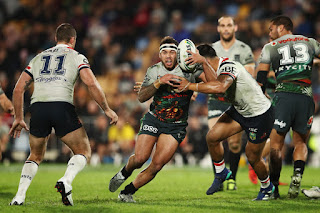 Copyright Photo: Getty Images​
My Warrior to improve could have gone to quite a few players, but I have selected Jazz Tevaga.

I don't rate Jazz as a hooker, and I think he performs at his best in the second row.

When he went out there his passing from the ruck was too slow, especially with the forwards not making a dent, a delayed delivery out of the ruck was the last thing the Warriors needed.

He also seemed to pick the wrong times to run out of dummy half, the key to Issac Lukes stellar performances this season has been his ability to pick and choose when to run and when to pass.

Jazz looked gassed very early on, and he started to make errors and give away simple penalties.

As mentioned above I think Jazz was kept out on the field for too long and needed to be pulled sooner than he was.

I'm hopeful that Jazz will bounce back, but I would just prefer him to stay away from the hooking role.

Round 11 sees the Warriors travel to ANZ Stadium to face the Parramatta Eels.

The Eels had a horrible start, but with the return of Clint Gutherson the Eels have started to show a lot of fight, and I think this will be a tough match for the Warriors.

Issac appears to be all set to return for this match, but Mason Lino looks to be out with the same injury as Shaun Johnson so there is a question mark over who will join up with Blake Green in the halves.

I honestly have no idea who I would put there right now, Tohu Harris, Peta Hiku and Karl Lawton all have some experience at five-eighth, but I'm not sure who I would be comfortable having there.

Right now I would probably lean towards Karl Lawton; he has been playing in the halves in reserve grade this season so at least he has the most recent experience there and Blake Green should be able to look after Karl out there.

Another option I would look at is putting Hiku there and bring Gerard Beale into the centres.

Im picking the Warriors to win by ten here and am hoping to see a much better performance than what they offered in Round 10.

So that was an embarrassing Round 10 performance, and as usual, I will leave you with some Questions.

Who would you have partner Blake Green in the halves if Mason and Shaun don't play?

Do you have a Warrior of the match?

Can this team perform without Issac Luke?

What is your score prediction for Round 11?
Reactions: mt.wellington and tajhay
About author