Finally, the Nrl season is almost here, we are only a few days away and I cannot wait!

The Nines have come and gone, the preseason matches are all over and it's time for the real deal.​

This also means it's time for me to give my thoughts on how the Warriors will fare in their 2017 campaign.​
I'm breaking this review into sections outlining my views on the preseason results and news, new signings (Or in this season's case signing), the 2017 squad, my game-day 17, the team's strengths and weaknesses and then winding the preview up with my 2017 prediction.

As is always the case, this is all just my own thoughts and opinions and they are always up for debate, I would love to start a discussion on here so if you want to share your thoughts, comment below and let me know what you think.​


​
The Warriors 2016 season was a huge disappointment and I've talked about last season in length in my 2016 season review (New Zealand Warriors NRL 2016 Season Review: Another year to forget comes to an end) so we can leave that in the past.

The end of the 2016 season, however, saw a lot of change happen at the Mount Smart headquarters.

A football advisory board was created to oversee all football operations at the club. 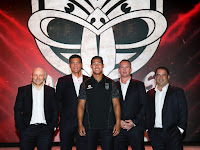 Copyright Photo: Andrew Cornaga / www.photosport.nz
​
This coupled with the announcement of Stephen Kearney taking the head coach role with Andrew McFadden staying on as one of Stephen's three assistant coaches along with Stacey Jones and Steve McNamara closing out the coaching team.

It appears the Warriors office have drawn a line in the sand this year and dug deep into Eric Watson's wallet and given Stephen everything he needs to pull the Warriors out of the mediocrity they have lived in for the past 5 seasons.

Stephen, a former Warriors player, knows the pressure that is constantly on this club.​
​
Warriors fans and the general public alike expect results from this team and if they don't perform, heads roll.

Signs of Kearney making his mark on the team have already started to take shape with the announcement of Roger Tuivasa-Sheck as the Warriors captain and Tohu Harris being signed to a four-year deal starting in 2018.

Words from within the camp seem to be promising, Kearney's mantra since crossing the Tasman has been "Above the Line" and the players seem to be responding to this and his coaching style and so far everything appears to be positive.

Not to forget the recent news of Kieran Foran's contract being accepted by the NRL has also added to positive vibe within the camp and fans alike.
​
​
Although the positive vibe did take a hit at the NRL Nines where the Warriors lost all three round robin games and did not make the quarters for the first time in the history of the Nines.

Shaun Johnson and Solomona Kata were both ruled out of the tournament with injury on day one and it clearly affected the team.

Putting it simply, at the Nines the Warriors lack of talent meant a lack of success.​

​
The Warriors followed up the disappointing Nines campaign with a 30-18 loss to the Melbourne Storm and a 26-6 victory over the Gold Coast Titans.

After watching both games I could see a definite change in this Warriors team.

They did give up an 18-0 lead against the Storm but in fairness that was after the topside players were rested and the young players were given some game-time and could not keep the tempo from the first half flowing.

The game against the Titans, however, was a lot more exciting to watch.

Roger Tuivasa-Sheck looks great and is stepping off both feet, showing no ill effects from last year's injury.

The most exciting aspect of the performance to me was the visibly improved communication.

From Roger constantly talking to the side and keeping the defensive line in check to Ken Maumalo talking to Solomona Kata when scrambling back in defence when the Titan broke the line, telling him to stay on his man instead of drifting out.

Communication has been a huge issue for the Warriors and hopefully, this change in the preseason will flow into the regular season.​ 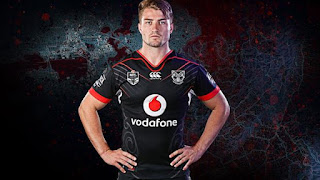 After enduring a tough 2016 on and more specifically off the field, we saw Kieran walk away from a substantial multiyear contract with the Parramatta Eels and eventually signing a one-year deal with the Warriors.​
​
The NRL were not quick to register his contract with the Warriors but he has now done enough in their eyes to prove he is mentally able to return and the deal is done.

Round three we will finally get to see Kieran running out onto a field in a Warriors jersey and attempt to get his career back on track.​
​
Until then we can only speculate on how he will go.

Will he be the final piece of the puzzle and get the Warriors back into playoff contention or will he crumple in a heap, still not mentally ready for the constant pressure that comes with playing in the NRL?

I firmly believe in the former, I feel that Kieran is going to do well with the Warriors and take some of the pressure off Shaun Johnson which has been sorely needed for years.

With rumours of Kieran wanting to extend his stay with the Warriors I am truly hoping that 2017 winds up better for him than 2016 was.​ 
​
Once again the Warriors have a solid squad on paper.

They currently have eleven Kiwi representatives and two State of Origin players on their books.

With Foran signing they now also have the Kiwis spine which when combined with a lethal backline consisting of Solomona Kata, David Fusitua, Manu Vatuvei and Tuimoala Lolohea has the potential to light up the competition.

Then the forward pack boasts the likes of Simon Mannering, Ryan Hoffman and Bodene Thompson, and when they are on their game a formidable front row in Jacob Lillyman, Issac Luke and Ben Matulino.

Throw in the young players that are coming through like Albert Vete, Sam Lisone, Bunty Afoa, and Ata Hingano and you have a really impressive team.

The hardest thing for the Warriors will be turning a great team on paper into a great team on the field, but I feel with Kearney at the helm they may finally reach their potential as a unit.​

The most obvious strength I have already mentioned above in having the entire Kiwis spine in their starting line up,

They have a large mobile forward pack lead by Simon Mannering and if they can use their offloading talents to unleash Roger Tuivasa-Sheck running his lines off their shoulders they will cause headaches for a lot of teams in the competition.

This also flows into the weaknesses, if the Warriors forwards do not do the hard work up the middle the spine will not be able to unleash the backline.

They also need to reduce the handling errors that plagued them last season, offloading is a tremendous facet of the Warriors game but they cannot force offloads or passes that are not on.

Defensively the Warriors need to work hard, they were embarrassing last year and they cannot just leave Simon to do all the work, keeping the preseason communication up will help in that area.

Well in my preview last year I was way off, I predicted that they would finish between 4-6, but that is the Warriors, they are well known to be consistently inconsistently and makes them hard to pick.

However I feel that things will be different this season, Stephen Kearney will not tolerate inconsistencies and will ensure that gets the very best out of the team week in and week out.

The Warriors have too good a side this year to be a cellar dweller again and I am picking them to finish Round 26 in 5th position, last year I said that they would win the 2017 season, I'm not ready to stake that claim yet but I have a feeling that this team has the quality to be in the Grand Final this year, so I say welcome back to playoff football Warriors because you will be there.

So let's bring on the season, it has been far too long and I cannot wait for Round One.

I will be writing reviews for each game as I did last year and I'm looking forward to talking to all of you throughout the year.

If you like what I do here please share my blog around with your friends and leave comments and tell me how you think the season is going.

will talk you again soon.

What are your thoughts on Roger Tuivasa-Sheck being named Captain?

Do you have any issues with the team right now?

Where do you think the Warriors will finish the season?

Are there any other players you would like to see the Warriors target for 2018 and beyond?
About author