NZ Warriors 2017 Round 3 Review: Trip down South goes to the Dogs 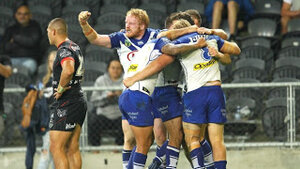 After last week's loss to the Melbourne Storm, the Warriors made the journey to Dunedin to face the 0-2 Canterbury-Bankstown Bulldogs.
The Bulldogs have not looked impressive this season and with the Warriors enjoying their third week in a row playing in New Zealand, they were expected to get a good win in front of a league starved South Island crowd.
Unfortunately for Warriors fans the Bulldogs got their first win of the year defeating the Warriors 24-12.

The Warriors dominated possession and territory for the majority of the first half but could not take advantage of the opportunities the Bulldog's handed to them.
The Warriors finally broke through in the 16th minute when Bodene Thompson dived on a loose ball in the in-goal.
The Bulldogs struck back with tries to Moses Mbye and Brett Morris to go into the half leading 10-6.
The Warriors continued to exhort pressure on the Bulldogs defensive line but just could not break the line.
Around the 60 minute mark the Warriors snatched the lead back after Shaun Johnson and Bodene Thompson combined to break the defence and send Shaun over to lead the game 12-10.
In a repeat of the first half, the Bulldogs took control of the game in the final quarter and ran in two more tries to first half scorer Brett Morris and Marcelo Montoya to put the game out of contention for the Warriors 24-12.

This was the Warriors worst display in 2017, they had no ideas on the attacking front.
When the only plays they have are an overused wrap around play and giving it to Shaun Johnson and hoping for the best, they are setting themselves up for failure.
The forwards lost the wrestle up front against the large Bulldogs pack and the resulting slower play the balls put the Warriors immediately on the back-foot.
There was no communication between the players which lead to plenty of misreads, this resulted in the Warriors missing 24 tackles.
I'm not sure what Stephen Kearney is going to do with this side.
Yes, this team was missing Roger Tuivasa-Sheck but the Warriors need to perform as a team instead of relying on individuals.
Players like Issac Luke, Tuimoala Lolohea, Solomona Kata and Charlie Gubb need to be put on notice if their performances don't improve they need a wake-up call and a spell in the lower grades.
The Warriors Intrust Super Premiership side has been playing well and there are many players down there deserving a call-up (Charnze Nicoll-Klokstad being a stand out so far this season).

This game was sloppy and the Warriors really needed to take advantage but due to their lack of intensity, they could not get it done.
It is only round 3 and it's early days and there is plenty of time to right the ship and get the season back on track.
However, if they continue falling off tackles and running sideways, well then we all better prepare for a long season.

My Warrior of the game.... well I haven't selected one, I don't think anyone deserves to be praised for this performance.

My Warrior who needs to improve is Issac Luke.
Issac had a lacklustre showing against the Bulldogs, wayward passes and dropped play the balls littered his performance.
It just looked to me that his head wasn't in the game, he appeared lazy and not interested in being there.
A positive for the Warriors is that Nathaniel Roache made his return from injury last weekend so if Issac continues his downward slide, Roache needs to take his place.
Maybe with the threat of another hooker breathing down his neck, Issac will pull his socks up and contribute to the Warriors cause once again.

So the Warrior's are now 1-2 for the season.
On the plus side, their draw is favourable as long as they improve their game-day execution.
On the other hand, they face the St George Illawarra Dragons this round.
The Warriors have an abysmal record against the Dragons having only won 5 matches in 24 clashed with only one victory on Australian soil at the Jubilee Oval, thankfully for the Warriors, this is where they are playing this Sunday.
The Warriors should have Roger Tuivasa-Sheck back from concussion as well as the possible Warriors debut for Kieran Foran.
Will these two automatically guarantee a win for the Warriors?
No of course not but if this side starts to work together and stop playing laterally they stand a good chance of leaving Australia with the victory.
I'm picking a bounce back and the Warriors to win by 8.

So that was Round 3 and as per usual, I will leave you with some questions.

Do you have a Warrior of the day?
What would you do with Issac Luke?
What players would you bring up from reserve grade?
Are you concerned about the Warriors lack of attack?

Let me know what you think and I will talk to you all next week.
Reactions: koolkat and tajhay
About author

I gave it to kenny,he had a dig.

koolkat said:
I gave it to kenny,he had a dig.
Click to expand...

Yeah Kenny was trying out there.