A bunch of New Zealand’s brightest young talents make the top 20, as kiwileaguecentral.com work towards naming the top Kiwi player in the world right now.

30. Kodi Nikorima – For most of the year he had limited minutes on the field, usually coming on late in games to relieve Andrew McCullough at hooker. But Nikorima showed enough to suggest he has a big future, possessing a good turn of pace and vision for the game. His debut tour with the Kiwis saw him play all four games, including two starts at halfback in the final two Tests against England.

29. Bodene Thompson – Found a new level at the Warriors playing on the right edge, combining a high workrate with plenty of ball-playing ability in attack. Thompson had 16 games where he clocked up 35 or more tackles, and he proved a success in the crucial role as Shaun Johnson’s bodyguard in defence.

28. Manu Ma’u – Really starting to come into his own as a first-grade player. A damaging force on the edge of the field, Ma’u has now added the ability to play big minutes – staying on the field for the entire game on 15 occasions last year – to become an important piece of the puzzle at Parramatta.

Greg Eastwood on the charge for the Kiwis. Credit: photosport.nz

27. Greg Eastwood – Continues to be a mainstay of the Bulldogs’ pack, offering up the occasional piece of attacking brilliance which defies his 112kg frame. These days his performance changes very little from game-to-game, which is a huge reason why Des Hasler and Stephen Kearney make Eastwood among the first men picked in their sides.

26. Isaac Liu – The loss of Sonny Bill Williams saw Liu play a bigger role in the Roosters’ side last year, and following a strong season he was rewarded with selection in the final Kiwi squad. Has a great chance to make a strong early claim this year as well with Boyd Cordner set to miss the first two months with injury. 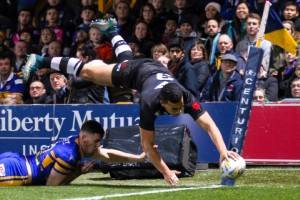 Jordan Kahu dives over for a try against Leeds at the end of last season. Credit: photosport.nz

25. Jordan Kahu – After a torrid time with injuries Kahu had his best year as a professional player, slotting in to play a couple of different positions in the Brisbane backline. Scored nine tries in 22 games, but it was in defence that he really added value for Brisbane, producing a couple of game-saving tackles late in matches through 2015. Was duly rewarded with a spot in the Kiwis at the end of the year.

24. Dallin Watene-Zelezniak – Injury cruelled the back end of his season, but with seven tries and nine line breaks in 16 games ‘Dallin Watene-Zelezniak’ did nothing to discredit the claims that he is a future star. Only suspension stopped him from making his Kiwis debut in the mid-year Test, and had it not been for injury he would probably have been part of the end-of-year tour.

23. Sio Siua Taukeiaho – The Otara Scorpions junior played 27 games for the Roosters, performing well when coming off the bench or starting. Combined clever pre-contact footwork with his sheer size to cause plenty of trouble for opposing defensive lines, averaging 119 run metres per game. A call-up to the Kiwis capped off a breakout year for the 23-year-old.

22. Alex Glenn – Fought his way back into the Kiwis squad with a big year for the Broncos, guiding his edge well as they pushed through to the 2015 decider. Glenn has plenty of tricks up his sleeve with ball in hand and also averaged 28 tackles across the season.

21. Tuimoala Lolohea – Playing just his second season of NRL footy Lolohea made a booming start to the year playing across numerous positions in the Warriors’ back five, scoring eight tries. From Round 21 onwards he was burdened with the pressure of replacing Shaun Johnson in the no.7 jersey for the club, but still finished the year with 70 points, eight line breaks and an average per game of 106 metres gained