In 2016 New Zealand players account for a large proportion of the world’s best rugby league players, and with every year more and more Kiwis come through to star in both the NRL and Super League.

Before the start of the 2016 season kiwileaguecentral.com is counting down the 50 best New Zealand players on the planet right now. Let’s take a look at spots 50-41. 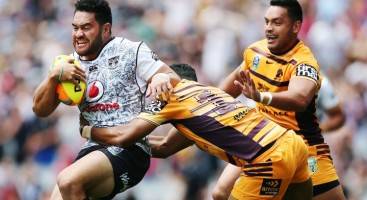 Konrad Hurrell showed glimpses of his brilliance in a frustrating year. Credit: photosport.nz

50. Konrad Hurrell (Warriors) – Suspension, injury and some poor form restricted him to just 12 games in 2015. It was his worst season since coming into the NRL, yet he still showed enough to suggest one day we might see the Konrad Hurrell we all believe he can be. This season shapes as the most important of his career as the Warriors’ patience starts to really be tested.

49. Thomas Leuluai (Warriors) – A ruptured ACL meant Leuluai didn’t play a part in the 2015 season beyond Round 10, adding to a frustrating couple of seasons on the injury front. But he remains a class presence at club and international level as he enters the twilight of his career. If fit and firing he should be right in the frame for Kiwi selection in the mid-year Test.

48. Sam McKendry (Panthers) – Fast becoming one of the old heads in the Penrith pack despite only being 26 himself. McKendry doesn’t make many mistakes – three errors in 24 games puts him right up with the best props in the competition in that category – and he enters his ninth season as an NRL player with a track record of consistency.

47. Albert Vete (Warriors) – Last year was meant to be a blooding season for Vete, but a combination of injuries to other front-rowers at the Warriors, and his own impressive form, meant he finished with 21 games to his name. Doesn’t have the pure aggressive streak shared by many front-rowers on this list, but his ball-playing skills and pre-contact footwork make him a valuable prospect.

46. Ava Seumanufagai (Tigers) – Stood out for his consistency last year in a Tigers team which lacked it across the board. A durable performer, Seumanufagai played 23 of his club’s 24 games, making just three errors. Could be set for an even bigger role in 2016 with Keith Galloway leaving the club.

45. Sam Perrett (Bulldogs) – His role in the Doggies’ backline is somewhat overshadowed these days by some more well-known names, but Perrett continues to add value with his workrate and finishing. The former Rooster appeared in every game for Canterbury-Bankstown last year, averaging 117 metres gained while also dotting down for 10 tries.

44. Frank Pritchard (Hull FC) – The only current Super League player to make this list, Pritchard was a big threat on the edges for the Bulldogs last year. The New Zealand Warriors tried hard to secure his services late last year which says something about the quality he still has to offer, and through 2015 Pritchard clocked up 10 line breaks, averaged 119 metres per game and got over for eight tries.

43. Josh Hoffman (Titans) – Fell away from the type of form which saw him selected to play for the Kiwis, although being asked to play a number of different positions throughout the year didn’t exactly help. His toughness on both sides of the ball continues to be his greatest asset.

42. Solomone Kata (Warriors) – The latest powerhouse back to come out of the Junior Warriors, Kata performed admirably in a debut year where he played every game and made the no.4 jersey his own. Kata topped the club’s try-scoring list with 12, doing enough to be in the mix for the overall NRL Rookie of the Year Award.

41. Gerard Beale (Sharks) – These days an automatic selection at both club and international level, Beale has gone from a reliable utility back to a class act in the centres. Understands his role isn’t necessarily about being a match winner, and plays to his strengths well.