One of the few shining lights in an otherwise dark season for the Warriors last year. Maumalo went toe-to-toe with the NRL’s top try-scorers for most of the campaign, eventually finishing with 17 from 23 games. Topped the entire competition when it came to post-contact metres, averaging 65 per match.

19 – Tohu Harris
For evidence of his value to a team, just look at how the Warriors struggled in his absence through the second half of the NRL campaign in 2019. Back and healthy this year, Harris has been huge for the Kiwi club so far.

Laid on 10 try assists in just 14 games for the Bulldogs last year, showing that when healthy he is still one of the game’s elite playmakers. After being drafted into the Kiwis’ squad for the mid-season Test against Tonga, Foran earned a recall for the first match against Great Britain, unfortunately lasting just minutes before suffering a serious shoulder injury.

So impressive was his form through the first half of the season, Hughes left Kiwis coach Michael Maguire with little choice but to hand him a Test debut against Tonga in June. The Wellington-born utility scored a try that night in what would be the first of three outings for his country in 2019.

Played in all 27 of Melbourne’s matches last year, scoring five tries and averaging 126 metres. While he wasn’t available for the end-of-season Tests, Bromwich appeared against Tonga mid-year and was a strong performer for the Maori All Stars at the start of this season.

Appeared in every NRL game his club played for the second year in a row, scoring nine tries. A potent force when he gets enough ball, his first two games with new club the Cowboys in 2020 saw him average 178 run metres and he looks set to have a big season.

The best Kiwi rookie of 2019. Fast tracked into the New Zealand national side after a string of eye-catching performances for the Sharks, the Bay of Plenty product finished the NRL season with 11 line breaks and seven tries to his name, forming a potent edge combination with fellow Kiwi Shaun Johnson.

Played hardly any time in his position of choice at hooker last year, with Storm coach Craig Bellamy instead deploying him as a middle forward. But Smith was excellent nonetheless and in one of his few games at dummy-half – in the Kiwis’ mid-year win over Tonga – the man from Waiheke was incredible, scoring a try, setting one up, breaking 10 tackles and making 40 of them on the other side of the ball.

Showed his durability at club level last year by appearing in every one of the Melbourne Storm’s games, averaging 40 minutes per match in the front row. Came off the bench in the mid-season Test against Tonga but didn’t appear for New Zealand later in the year due to suspension.

The Tokoroa product continued his rapid development in 2019 with a number of classy showings for the Roosters. Interestingly his best performance came during a cameo at fullback in round 14, with Manu running for 300 metres and scoring a pair of tries. Now rated by many one of the best centres in the world. 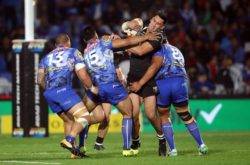