You are using an out of date browser. It may not display this or other websites correctly.
You should upgrade or use an alternative browser.
kiwileaguecentral.com wrap up the latest NRL round from a Kiwi point of view.

Round 1 didn’t just mark the beginning of the season for all 16 NRL clubs, but also the start of what will hopefully be long and prosperous careers for New Zealanders James Fisher-Harris, Josh Aloiai, Nathaniel Roache, Zane Musgrove, Leivaha Pulu and David Bhana. Congratulations to the latest batch of Kiwi NRL players.

Back to the field and fifteen minutes into the season-opener Jordan Kahu ensured he would go down in the history books as the first try-scorer of 2016. But his night quickly soured, as he was forced to leave the field through injury. The ensuing positional re-shuffle saw Alex Glenn shift into the centres where he set up a try and ran for 100 metres in the Brisbane victory.

Back-rowers Lewis Brown and Martin Taupau both started in their Manly debut, clocking up team-high counts of 41 and 40 tackles respectively. On the other side of the field Sam Perrett, Sam Kasiano and Curtis Rona all registered four-pointers for the Bulldogs in their big win over the Sea Eagles, all clocking up more than 100 running metres along the way.

While Penrith went down to Canberra in their clash on Saturday, South Auckland-raised utility back Peta Hiku still made a try-scoring debut for the Panthers, crossing in the 38th minute of the 30-22 loss. The big talking point from a New Zealand perspective however was the dropping of Elijah Taylor to reserve grade. 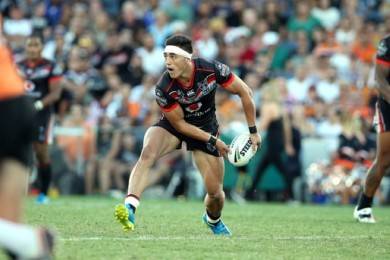 Nathaniel Roache made his debut off the bench for the Warriors in a 34-26 loss to the Tigers. Credit: photosport.nz

The Warriors produced a passive first-half performance before coming back to lose 34-26 to the Wests Tigers. New Zealanders scored all five tries for the Warriors, with Simon Mannering a bright light in an otherwise disappointing performance. The side’s former captain made 55 tackles, a line break, scored a try and set one up.

Kiwi international Bryson Goodwin and Auckland-born Hymel Hunt both crossed as South Sydney demolished the Roosters, while up on the Gold Coast NZ big boppers Agnatius Paasi and Zeb Taia both ran for over 100 metres and scored a try as the Titans racked up a 30-12 win over the Knights.

The final game of the round saw more Kiwi tries, as Jason Nightingale and Benji Marshall opened the scoring for the Dragons, before the Bromwich brothers combined – a clever offload from Jesse later finding Kenny for a try under the posts – to give the Storm an 18-16 lead which they eventually won the game with.