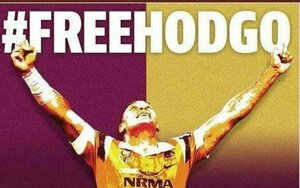 Should Broncos skipper Justin Hodges have missed this weekend’s grand final after that grade 1 dangerous throw charge on Aiden Guerra?

If the NRL was consistent then yes of course he should have missed a game. Would that punishment have been fair though? No way was that indiscretion worthy of missing a grand final. In a way the judiciary got the right outcome but try telling Steve Roach or Issac Luke that – those guys missed grand finals in a similar way Hodges could have.

The time has come for the NRL to make all grade one charges result in monetary fines as a means of punishment. If referees made better use of the sin bin and send players off for serious indiscretions, fine-only punishments for technical infringements are much fairer. It wouldn’t matter then what game was next up – Origin, test match, grand final or regular season game – they all carry the same weight and a minor offense won’t see players miss big games.

Suspensions should start with grade two charges and could be complemented by fines as well to further reduce the amount of time leading players are ousted for.

While we don’t want to go soft on foul play, the game also cannot afford to have leading players sitting out big games for minor or technical errors. The financial penalty will act as an incentive not to commit fouls anyway.
Reactions: 1 user
About author
Play The Ball
This article has been written by Dale Budge. Dale is a well known rugby league commentator and journalist, having covered the sport for over 10 years.

Interesting approach I think and could have some merit. Might I suggest that if you're going to suggest a financial penalty - it's not a fixed amount, but a percentage of their registered contract (including third party agreements).

My rationale? Say for example it's a $5,000 fine for a grade 1 careless high tackle.

I also think that there should be some demerit points attached to these grade one charges. My rationale behind this being:

Someone is playing the Cowboys, the fine for a grade 1 high shot on JT might be $5k (using the example above). Club asks a player to hit him with a loose high shot to rattle him early and put him off his game with a promise to pay the $5k fine on his behalf... Not sure on the amount of demerits - but think they should be included.